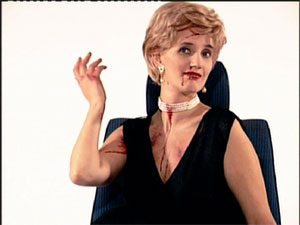 AES+F’s 1998 work Who Wants to Live Forever addresses the death of Princess Diana in the previous year, and the obsessive media engagement in the circumstances of this sensational death. A Diana double takes her place before the cameras, performing a set of poses which imitate the Princess’s body language, presenting her bleeding wounds with gestures reminiscent of catalogue models and Christian martyrs alike. The macabre work peruses the symbiotic relationship between celebrities and the public, between glamour and death, publicity and sensation, entertainment and disaster.