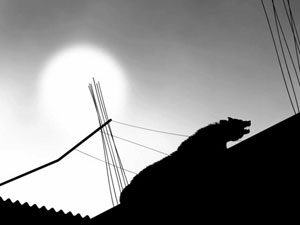 Carlos Amorales’s solo exhibition at Herzliya Museum of Contemporary Art spans three of his pivotal works. The video Manimal was created by 3D animation techniques with wholly flat, two-dimensional forms. The work is based on a database of digital images called Liquid Archive which Amorales has been constructing since 1999. Originating from his own drawings, he uses this reservoir of images to implement many of his works. The images–forms devoid of scale and medium, sharp black silhouettes based on formal and symbolical archetypes, which disallow individual identification-turn out to be silhouettes of human figures, skulls, animals, birds, insects, spider webs, trees, buildings, and various sites. These images, which are cornerstones in the artist’s visual vocabulary, are variously intersected in the work process, and the tension between the arbitrary and the premeditated dimensions in their mode of intersection generates internal conflict, enhancing the potential of alertness and horror upon viewing. In addition, the work is accompanied by a dominant, rhythmic and repetitive soundtrack (by Julián Lede), which is occasionally interrupted by processed squeaks or screeches, and which transpires simultaneously to but independent of the motion of images or the camera movement.

Amorales’s work employs familiar images and symbols to create states of uncertainty, of threat, of something which is at once foreign and familiar. At the same time, the video unfolds a linear tale about a city being overtaken by a pack of wild wolves. By means of this narrative structure Amorales strives to discuss metaphorically the tension between nature and culture, issues of immigration and survival, and even notions such as hybridity, savagery, the degradation of moral and social norms, the domination of impulses, or rather-of natural needs. The title of the work, Manimal, attests to one of the major themes at the core of Amorales’s works, many of which combine images of animals and humans, or cross forms of life and structures existing in nature with contemporary urban manifestations and social perceptions.

Dark Mirror, 2008, features a large bird prostrate, shattered, spread on the floor. The fragmentation and breakage of the bird’s body is highly conspicuous, yet the fragments may still be put together into a coherent form. The bird parts appear, at first sight, highly smooth and bright, but a closer look reveals that each and every unit comprising the structure has, in fact, been separately and sharply hewn and polished, like the silhouettes of the Liquid Archive images or the outlines of an independent architectural structure. The work conveys great force stemming from the bird’s dimensions and materiality, but at the same time also a sense of total collapse inherent in its soft merging into the floor.

In the new work, Explosion, 2010, on the other hand, only the fragments seem to have remained. The work consists of hundreds of sharply cut acrylic surfaces, hovering in the exhibition space at different heights; dissociated fragments ostensibly disconnected beyond the sense of rift, dissolution, and estrangement they convey. The work is made entirely of pieces of material detached from any source or context; refractions of light and form, splinters of body and meaning. It conceals great violence, which nevertheless remains unrealized. It seems to freeze one moment in the process of explosion, a moment which oscillates between the energetic cohesion that has held all the different elements in a single body, and final scattering and loss, as in the supernova effect where a massive star explodes because the internal pressure caused by nuclear fusion outward is insufficient to balance the great pull of gravity inward. The result is akin to a state of breathlessness, hanging between inhaling and exhaling; an enigmatic state combining a sense of overabundance and flooding with a brittle airy feel.

The three works in the exhibition fully and intricately unfold the underlying principles of the visual language and themes addressed by Amorales’s work over the years. The human existential condition arising from it is one of constant change, and consequently-also of fear, of horror of the unknown; a state to which transgression, instability, and loss of control are as integral as evolution, progress, optimism, and hope.

Carlos Amorales (b. 1970) lives and works in Mexico City. His work extends over many mediums, including painting, drawing, sculpture, design, video, performance, installation, music, etc. He often collaborates with artists from other disciplines, such as wrestling, dance, fashion, and more.

The exhibition at Herzliya Museum of Contemporary Art was made possible through the support of the Embassy of Mexico in Israel; the Mexican Ministry of Foreign Affairs; Fundación/Colección Jumex, Mexico City; and Galerie Yvon Lambert, Paris and New York.