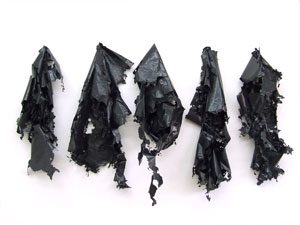 Alongside the wall hang mysterious, suggestive objects. Somewhere between sculptures and raw materials, they evoke a range of references from the history of Modern sculpture – from corroding metal sculptures, through Minimalism and post-Minimalism to the French Support/Surface. The encounter with the material upon approaching the objects challenges the first impression they give: they are made of black plastic sheets, pierced with holes in an ambiguous pattern – some are large, some are small and resemble lacework. It is evident that the surface and whatever action performed on the material are no less important than the form of the object, which suddenly looks more like material leftovers damaged by some kind of vermin.

The video, projected in the adjacent room, gives away the secret of the objects and their creative process.
Goldstein kept gerbils in his studio, after discovering that in order to sharpen their teeth they gnaw on objects, with a preference to plastic objects. The sculptures he presents here are plastic bags gnawed by gerbils, which function as assistants or workers, and at the same time display a natural phenomenon, while the artist’s interference in the creative process is kept to a minimum. The objects exhibited in the museum represent three work methods: in one the plastic bags were laid on the gerbil’s habitat floor folded one over the other to create a symmetric pair, in the second a crumpled bag was gnawed until it lost its shape, and in the third the bag was laid flat on the habitat’s floor. Each method leads to a different pattern of gnawing and scratching, and that summarizes Goldstein interference with the gerbils’ work process.
Merging a natural phenomenon, industrial artificiality and hand craft into one object, the work brings up key question in contemporary art: the artist’s role as creator and direct interference in the creative process as a condition of the work of art; awareness and intention in the creation of an aesthetic object and actions of destruction and damage as acts of creation.