The Chilling Loneliness of Inanimate Objects
Documentation of industrial architecture and photographs of various interiors, among them those of institutional spaces, explore man-made patterns of construction and vision, shedding light on the modeling of social life. These photographs, however, evade the strict dictate of documentation and social destiny, blending into other fields, such as sculpture. The photograph thus appropriates qualities of two- and three-dimensional art and spatial art, thereby constituting the basis for its ultimate goal: deconstructing reality into an assemblage of fractions intended to reflect that very reality more accurately. 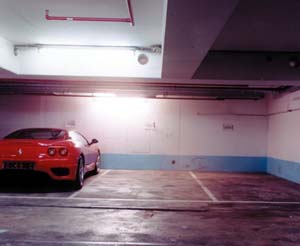 In Ilya Rabinovich’s work, the fractions omitted in this process are human beings. Like any other thing, they are present in the interiors of the Berlin parking lots, although they are no longer congruent with the photographic composition that has transformed into an arena of props left behind. Had they remained, they would have dissolved the careful arrangement of tectonic forms, and returned it to the illegible, obscure field of the entire universe. Instead, the spaces remain isolated in their anonymity, telling us nothing more than what we already know through their symbolic reasoning.The artist is well aware that these are not neutral, meaningless spaces, but rather triggers for potential narratives. Traces of the function played by these spaces remain in the photographs, yet the signs of use are lost in the chilling loneliness of the inanimate objects. The graphic signs posted between the empty levels of the parking lot, symbolically linking architecture to cars, provide an omnipresent hint of human presence.

In Rabinovich’s works, parking lots emerge as the “white cube” of the modern art industry. These are plain white spaces that function as envelopes and as carriers of symbolic content. Rather than conveying a vague economic meaning, however, these spaces house the objects of a wide social consensus. Nevertheless, these objects are presented discreetly, a fact that stands in contrast to the communicative nature and representation of the car. The context of the car’s aesthetic and economic iconography as an object, an iconography that is based on speed and movement, is transformed and suspended, and it is the suspension that determines the reproduction of the situation. The architecture and the cars, mobility and immobility, are fused in the artist’s carefully modeled gaze. A meticulous process of observation underlies all this. The situation is known to the photographer, as an expert in the basic structure of the public sphere of life. Already in his earlier works, Rabinovich condensed public housing neighborhoods, museums, hospitals and landscapes in different countries into constructions of images typified by incredibly simple beauty and compactness.