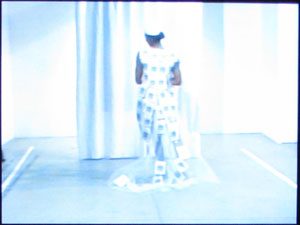 The idea for Défilé/Performance (fashion show/performance) came to her in 1995, following the eruption of a debate on the question of accepting veiled girls into French public schools. The women participating in this performance, which took place at the École de Beaux Arts in Paris wore designs created by Khattari, which raise our awareness to the use of the female body as a battlefield for rival Western and Muslim ideologies. They revolve around the theme of the hijab, the traditional black garb worn by Muslim women. Khattari’s creation, constitutes a protest against the Islamic laws that perceive the body as a forbidden entity. In conventional fashion shows, a designer presents creations that flatter the female body and exalt its beauty and power. In Khattari’s fashion show, by contrast, the models were clad in various garments that hid their bodies, impairing their movements and even choking them as they strolled in front of a bewildered Western audience.
G. L.