Michal Heiman’s exhibition includes an installation, performance, video, sound, photographs, floor work, objects, documents, and archival display. In 2012, she came across the book The Face of Madness: Hugh W. Diamond and the Origin of Psychiatric Photography (1976), and had a crucial encounter with a photograph in it – Plate 34. This image led her to undertake a project that seeks to envision the political, cultural, gendered, and psychic conditions of possibility of a “return.” Heiman’s radical proposal is to create a new community comprised of dozens of women – asylum-seekers, activists, artists, and others – from 1855 to 2017.
The young woman who stared at Heiman from Plate 34 – a photograph taken circa 1855 by Dr. Diamond (1809–1886), a British psychiatrist who was a senior staff member at the Springfield Hospital (formerly the Surrey County Lunatic Asylum) – looked to her exactly like her adolescent self. She even recognized her particular hands.
In an endeavor to find ways to revisit the women photographed in the 1850s while hospitalized in the asylum, Heiman’s first act was to sew herself a similar plaid dress. This dress served her as a principal strategy for gaining access to the asylum. She began taking multiple portraits (still photographs and videos), mostly of women, including herself, as well as a few men and some people of non-binary gender, all wearing this dress.
In her exhibition, Heiman offers an opportunity for a personal encounter with herself. Its aim is to provide the artist with consultation and support. 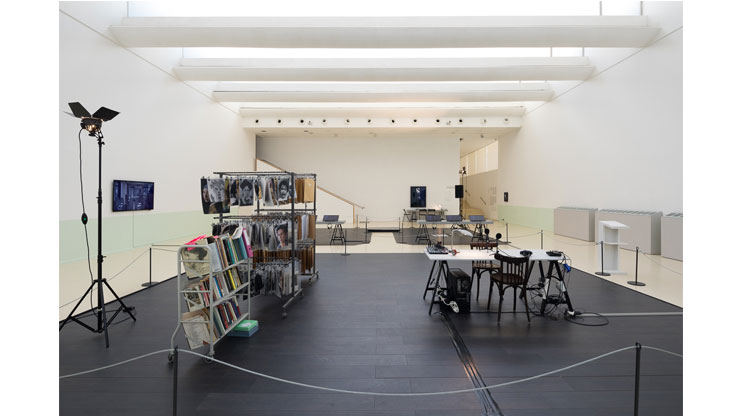 This encounter is to be a continuation of, and elaboration on her previous actions, such as the Michal Heiman Tests (M.H.T.s) Nos. 1–4, in which examiners on the artist’s behalf engaged in individual or group dialogue with the viewers. Heiman will be present at the gallery at times to be announced, without committing herself to a particular repertory of action. She will speak to visitors, listen, interview, share the story of her explorations, or become engrossed in contemplation. The photographed figures of two male guards in lightboxes at the entrance to the exhibition resonate the guard in Kafka’s story “Before the Law” as well as the ancient theme of nostos (epic return).
The title of the exhibition, “AP – Artist Proof, Asylum (The Dress, 1855–2017),” reflects the bureaucratic and technical dryness of the archival mechanism. At the same time, it refers to conventional forms of classification in the field of artistic print. The letters AP (Artist Proof) are used to signify the original copy of a print (which is not included in the count of the limited edition) approved by the artist, according to which the edition’s numbered copies are printed. With the rise in the commercial value of artistic photographs it has become common practice to adopt a similar numbering system for photographic limited editions.
In the context of Heiman’s oeuvre, AP is not merely a procedural or commercial term that affirms the work’s value; it is also a re-affirmation of the live presence of the artist as a human source of authority in the age of digital reproduction. Methods of organization and classification are further represented in the exhibition by an archive of photographs and documents organized in a folder system. As is usually the case in archives, access to it is limited and requires the artist’s permission; only she may remove materials from this archive.
For her current project, Heiman traveled to London, where she visited archives and the insane asylum where Dr. Diamond had worked, which is now part of the Springfield Hospital.
Her documentation of a trip to the hospital on the London Underground is presented in the exhibition through a combination of sound and video projections. In the film “Plate 34” Line, London (2016) the traveler in time is portrayed by the artist’s daughter, Emily. In another film by the artist, Double Check (2016), screened on the gallery floor, a spokesman of the institution that used to be the Surrey County Lunatic Asylum presents Heiman with the official story of the place.
Toward the end, one sees the architectural plan of the asylum. Like the plans of similar institutions across the world, it reflects the organization of the institution and its day-to-day management. This includes separation between men and women and between those who are more or less severely afflicted, rooms for isolation and punishment, sleep halls, communal showers, and work rooms where the inmates engaged in traditional feminine pursuits, mainly laundry and sewing. However, Heiman – a determined pilgrim – reconstitutes the story. Instigating multiple stratified, reconstructive returns – to the institution, asylum, archive, and museum – she points to the act of return as the only sane way of starting a recuperation process.