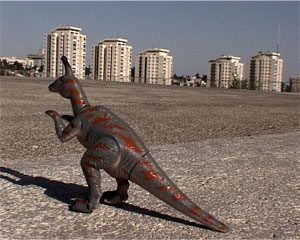 Nevet Yitzhak creates a “concert” of several screens, which she constructs from a myriad of everyday noises and sounds. The fastidious, advanced principles of non-mainstream music are dissonant with the images exposing the noises’ mundane origins, mainly in children’s toys and television channels, thus charging the solemn soundtrack with humor, vivacity, and playfulness.