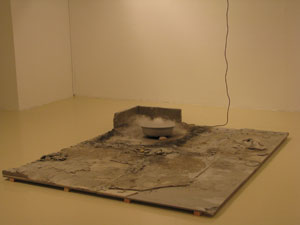 Canell’s expanded and (quite literally) expanding conception of sculpture as ‘an fixed, durational phenomenon’ is most insistently reflected in her assiduous investigations of the sculptural possibilities and properties of such recalcitrant materials as sound, light, water, steam and electromagnetism. While some of her works incorporate an overt musical element many more of them are combined in configurations in which particular works hum or drone so that the exhibition space is infused by sound, though sometimes at a level that is barely audible. The sound reverberating through certain installations has on occasion been complemented by the inclusion of one or more of Canell’s ‘evaporation works’, which produce clouds of steam rising from buckets of water fitted with mist machines… That these mist machines operate on the basis of ultrasonic vibrations draws attention to the parallels and overlaps between the forms of movement proper to gas, sound, and water as well as other waveforms.

Canell’s interest in various types of waveforms points to the growing significance of the notion of ‘radiance’ to her work. Noting that Sir William… Crookes (1832-1919), the chemist and spiritualist who invented the cathode ray, spoke of fourth state of matter, in addition to solid, liquid and gaseous, which he termed ‘radiant’ – she glosses her own elaboration of the concept as follows: ‘ I have applied this idea of radiance as a sculptural, relational component – opening up the meaning to include any type of fluctuation. In this sense, radiation can slip human perception but nevertheless reach out and fill the space between objects and bodies'”.
Caoimhin Mac Giolla Leith1
1. Evaporation Essays – On the Sculpture of Nina Canell, Distanz Verlag GMBH, berlin, 2010. Pages 36-37