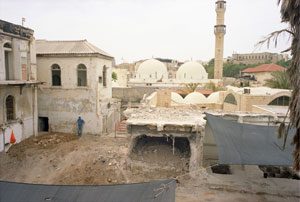 This series further explores Siman-Tov interest in the interaction between different types of sites visitors in them, and the way those interactions create different “Israeli spaces”. What at first seems a simple enough action, in fact necessitates an elaborate the complicated coordination between various authorities: the Israeli Antiquities Association, the Knesset and Law keeping authorities, municipal committees, real-estate entrepreneurs and even religious institutions. The exceptional transient nature of salvage excavations sites, bringing together official authorities in these unplanned spaces, expands the definition of an “Israeli space” beyond the physical. Between the plan and the “field”, the institutionalized and the private, between planned and spontaneous behavior, spreads a fine web of physical, geographic, historical, religious, symbolic, cultural and social interlinks.

In addition to space the series also deals with the time dimension. Particularly in Israel, it seems that it is impossible to build a future without stumbling on history and the past – dormant strata, that any disturbance in the strata covering them brings back to life. An unplanned hole is torn in the urban landscape, where reconstruction or development works took place, and for a limited time, history slink back into every day life. The reemergence of the site’s past has an expiration date: in most cases of salvage excavations the contractors will be allowed to go ahead with the construction work, which inevitably entails the destruction of the historical site. After any exceptional findings are removed from the site, the IAA will then photograph the site before its destruction. Everything is covered once again, returning to its previous condition or used as a foundation for the construction of something entirely new. Within a few days there will be no trace of the excavation or the archeological site. In some of the photographs you can see only traces of the excavations and findings. Siman-Tov photographs captures the only remaining evidence to the surfacing of the past in the present

Orit Siman-Tov (1971) born in Israel. Lives and works in Jerusalem.