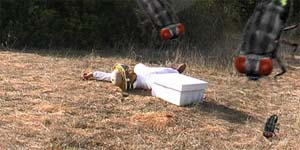 Combined video and animation, presenting the beekeeper* lying on the ground, as if he were dead, encircled by flies instead of bees, and there is no one to rescue or touch him; it is doubtful whether anyone sees him at all. A continuous present of a time spell in which the undertaker is already dead as well.
*The Hebrew words designating “gravedigger” (undertaker) and “beekeeper” are homophones.