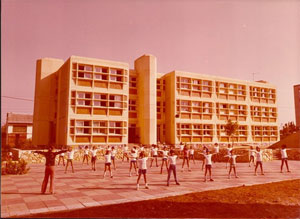 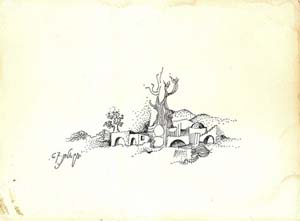 Zvi Elhyani takes Israeli architecture personally. From the archive he has gathered as an architect and historian, he samples an “Archiautobiography,” an autobiographical architectural catalogue that sketches a personal biography, which is always collective as well, through specific structures, spaces and building typologies where he spent his life, starting before his birth: the architectures associated with his immediate family, his parents’ bed, hospitals, apartment buildings, kindergarten and school types, the youth movement compound, the street, the city, the IDF induction center, the university campus, the academy, the park, the shop, the bomb shelter, the museum.

The wall installation Nehalim, a sequence of items and a promotional film, addresses the physical, ideological, masculine space of the Nehalim Bnei Akiva Yeshiva where the adolescent Elhyani studied in the mid-1980s. Located in a verdant modernist campus in Moshav Nehalim, east of Petach Tikva, the Yeshiva was founded in 1954 by rabbi and former Knesset member (no. 2 in the extreme right-wing party, Moledet), Yosef Ba-Gad. The Nehalim Yeshiva drew the finest national religious (Mafdal) youth, young men of good bourgeois religious families. In late September 1967, a line of cars headed by Hanan Porat left the Yeshiva toward Gush Etzion, laying the cornerstone for Jewish settlement in the West Bank.

An early perspective of the Yeshiva building appears in a class photo of Daniel Elhaiany, Zvi’s father, graduate of the 1963 class, many of whose alumni established the settlement Elkana in the late 1970s, as well as the Gush Emunim (Faith Block) movement and the Mafdal party, some are now among its leaders.
In 1971, when Zvi was born, his father started a souvenir business that flourished thanks to the times of euphoria between wars and the return to the liberated archaeologies. Among the first models produced by the factory, based in Moshav Nehalim, was a reproduction of a drawing depicting Rachel’s Tomb in Bethlehem.
Daniel’s brother, Jacob El Hanani, sought his path in the 1960s Israeli art world which was reviving itself in ruinous realms. He studied at the Avni Art Institute in Jaffa, went to paint at the artists’ village of Ein Hod, and later immigrated to New York. Each of the brothers paved his own way, one to commercial craft, the other to abstract art. Both paths emerged from the recent memory of the Arab stone house in which they lived when they arrived in Israel from Morocco in the early 1950s, which was located in a deserted Palestinian village not far from Nehalim.

The installation Nehalim re-discovers, from a biographical perspective, the 1960s and 1970s local Israeli architecture of rectangular modernism’s era of corner-rounding and -cutting, the cradle of Israeli post-modernism, via the ruins’ arches, the dome of Rachel’s Tomb, the prefabricated type of elementary school structure, the Yeshiva’s religious modernism, the Bezalel School of Arts building on Mount Scopus, and the soft brutalism of the Herzliya Museum-Yad Labanim building – the new item in Zvi Elhyani’s archiautobiography as an exhibitor.