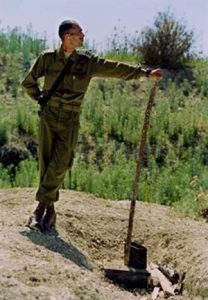 In the series Trackers taken during 2005, Ahlam Shibli continues to explore the living conditions of the Palestinian population in Israel. Consisting of 85 photographs, most of them featured in the current exhibition, the series addresses the issue of the Bedouins volunteering to serve in the Israeli army. Ahlam Shibli’s camera follows the activity of the Bedouin recruits in the army, also documenting them at home and in their public places. According to the artist, the series researches the price a minority is forced to pay to the ruling majority, whether in order to be accepted, to change its identity, or to survive – and perhaps all of these and more.

The series Trackers was recently featured as part of Ahlam Shibli’s solo exhibition at the Kunsthalle Basel, Switzerland.

Ahlam Shibli (1970) was born in the village `Arab al Shibli. She lives and works in Haifa