Amir Yatziv | Re-view | Back to Berlin

Amir Yatziv’s installation includes some objects related to Bauordnungslehre by architect Ernst Neufert: a video work, a copy of the original book, a three-dimensional plastic building model and a construction plan from the book. German architect Prof. Ernst Neufert was known among architects worldwide for his book Bauentwurfslehre (nicknamed The Neufert), which is used to this day as a lexicon for standard construction measurements. Neufert started out in the Bauhaus Movement and in 1939 was appointed as first deputy of Albert Speer, the Third Reich’s Chief Architect. Later, in 1943, he wrote another book called Bauordnugslehre, or BOL. The video work starts with a close-up shot of BOL, which includes the chapter “Hausbaumaschine”. In this chapter, Neufert offers a description, plans and blueprints for a machine designed to automatically mass-produce multi-story residential buildings, a sort of mobile house manufacturing plant based on an efficient, precise process. The machine was planned to be made out of metal tracks on top of which scaffoldings were placed, with lifts bearing constructions floor by floor so that the workers could cast the next construction in an endless row of identical concrete housing units. This would form an assembly line for standard residential projects planned to meet the anticipated meteoric growth of Germania – the expanded Berlin that was part of Hitler’s vision for the country’s future. The video continues with a marketing representative promoting Neufert’s 1943 invention as a contemporary project. To help “sell” the project, he uses Nietzsche’s argument that “only automatism makes possible perfection in life and creation”.[1] Under the guise of a study on architecture and technology, Yatziv’s work reveals the workings of the German ideological machine. In a humoristic, indirect approach, combining animation and ad-like features, the artist raises emotionally charged issues such as the Nazi regime’s cruelty and inhumanity as articulated in Germania’s megalomaniac urban planning, or broader issues, such as the passion for global standardization and the relation between production efficiency and the gradual regimentation and dehumanization of society resulting in the blurring of the individual’s unique, personal identity.

This work documents two reconstruction efforts of the infamous entrance gate to the Auschwitz Concentration and Extermination Camp in Poland, bearing the slogan Arbeit Macht Frei (work sets you free). The first reconstruction work was performed in 2004 by a team of Israeli metalworkers as part of the general renovation of the Yad Vashem Museum in Jerusalem. The second was performed by a team of Polish metalworkers, who reconstructed the camp’s original gate using a similar process a few years later, in 2008. The two teams operated with no prior coordination. The slogan Arbeit Macht Frei was originally adopted by the Nazi Party in the 1930sto promote its massive housing construction policy and combat unemployment. It hangs on the metal gates of Auschwitz I, Dachau, Gross-Rosen, and Sachsenhausen camps, as well as Theresienstadt Ghetto. Amir Yatziv’s film is documentary, scientific and technical. It starts with close-up shots of images of rusty elements from the original gate, with a historical reconstruction expert reading aloud from a Polish laboratory report presenting those images. Despite this initially factual character, suspense is gradually built up as the film progresses, using a fictitious narrative: Yatziv creates a bogus competition between the teams over the quality of reconstruction, whereas in actual fact the teams became aware of each other’s activities only after completing their work. The physical concentration on the metalwork seems to free the workers from dealing with the difficult questions involving the iconic gate’s purpose, Auschwitz and the Holocaust in general. In Yatziv’s words, “This work suggests a new discourse on memory through the metaphor of work and iron, echoing the slogan ‘work sets you free’.” Throughout the film, no historical or emotional issues are raised, although these have been naturally invoked during the shooting in conversations, mainly with the Israeli metalworker team, on the object itself as well as on normative issues related to the Holocaust. These conversations have been omitted by the artist in the editing process, in order to maintain the work’s professional documentary style. The resulting sober, cautious, indirect and distant reference to the Holocaust is also characteristic of the other works in this exhibition, and of the sublimative artistic process undergone by the young artist generation featured here. 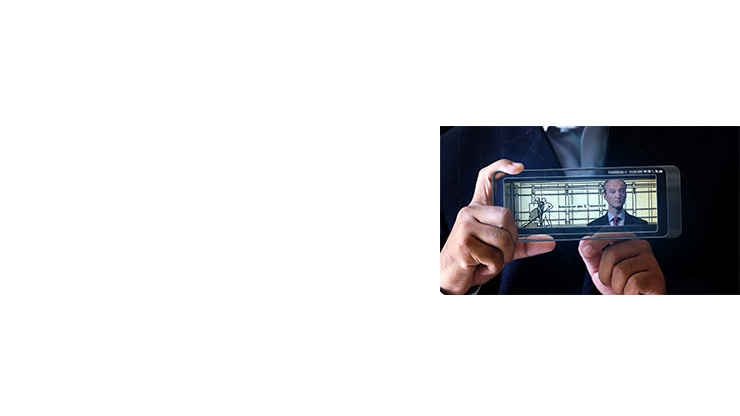