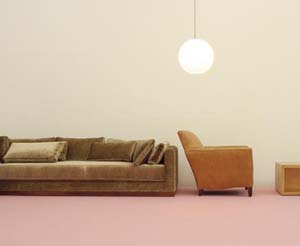 One may perceive Three, Two, One as a “pleading” installation, namely – a principal, critical installation that realizes a piercing gaze at “culture” (an installation that addresses structures of taste, of a bourgeois social profile, of inquiry into the notion of museum display space, into art’s consumerist channels – art consumption, art as a commodity, etc.). Nevertheless, something in this piece implies the limits of its interest in a critical principle such as this. With an equal degree of arbitrariness one may regard this installation as an emotion alert – an installation that utilizes an indifferent rhetoric that is associated with the standard, with the all-too-familiar, to enshroud it with a mist of emotion, a private case of false promise. While all representations of domesticity ultimately touch upon the warmth that this concept is designed to elicit in each and every one of us, the act of unveiling the essential skeleton at the core of domesticity – the home – is almost automatically linked to the concept of its (ideological, political) collapse, thus engendering a sense of disconcert […]

[…] What attests to Anat Betzer’s installation as an emotion alert, as a locus that refuses to let the viewer be enchanted by the cold, technological facade, is the fact that it is brought to a point where the whole is smaller than the sum of its parts, a place where it cumulates and cumulates in vain. The value of multiplicity (more and more furniture, another fixture and another ashtray) is linked to its zigzagging between power (effectiveness that is spawned by size and profusion) and groundlessness or futility. This also applies to the principle embodied in the realization of the installation, which calls upon the artist to operate as an image-generator and a designer of living areas: the artistic decision is alternately substituted by the empty act, by non-ideological secular formalism, by the art of practical thought. The similarity to the thing itself (a furniture showroom) efficiently channels the viewer to contemplate the purpose, to demand the realization of the metaphor […]

[…] The phrase Three, Two, One signifies the standard structure of sofas making up a living room – three-seat, two-seat and one-seat sofa units. When it is introduced to a territory of meaning, the linguistic combination also connotes values of “countdown” and reduction. Dwindling and drainage are linked to a type of laxity, a contextual loss of blood. This particular nominal combination, however, also generates alertness. It blends an indifferent existence with tension. Vis-à-vis the decisive presence of the installation, the title produces a commentative air of duration, of narrative dynamics. The “countdown” encodes the single, concurrent manifestation of the installation, along the sequence of a retreating time, in a “biographical” vein. The product possesses a historical core; it has a past. It cumulates into being a thing in the world following one…two…three things. In this respect, a viewer walking through the work is invited to realize a coveting place and a deciphering, locating place. For that importunity he is granted a little compensation – the installation delivers from afar, it does not strain the muscle of seduction, and it resembles, in a risk-taking manner, “the thing itself” – a furniture shop. This is not a heart-rending arena. On the contrary – it compartmentalizes, classifies, showcasing the show, modeling, as if by deliberate mistake, a prudent viewer […]

[…] There is something magical about a sudden failure in translating a private human moment into universal values. Such failure repeatedly elucidates/reminds of the disconcerting existential fact that “we are ultimately alone.” The acute, effective use of universal values and cultural conventions will always blur the realization that one being can never absolutely touch upon another. The thick cloak called “communication” or “language” is a structure that masquerades as a cartilage connecting infinite embodiments of aloneness. From among the myriad of images generated by the home, ranging from intimacy to publicity, the domestic living room most of all partakes in that denial, in the creation of a structured illusion of “togetherness.” Incidentally, this is the secret magic of the coinage “public toilets,” for instance, which beyond its erotic baggage also decentralizes the values of intimacy and privacy, once again preventing the possibility of us discovering ourselves, alone […]