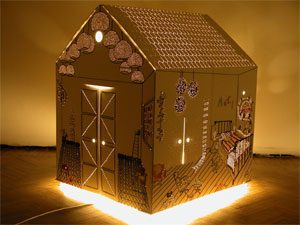 Anila Rubiku presents a small house with a slanting roof, akin to a naïve scheme of a house in children’s drawings. The dark space is illuminated with light emanating through the fine tissues and apertures piercing the house’s walls, transforming it into a type of magic lantern, casting images on the walls of the surrounding space. Images of the interior are embroidered on the walls of the paper house, appearing as though projected on the walls, exposing the interior which usually remains hidden inside. The artist embroidered the colorful impressions with her mother’s assistance, a joint work alluding to traditional female crafts. The colorful images are warm and touching in their domestic modesty and nostalgic yearning.

This nostalgia for a collective image or memory of a home as a warm, inviting, well-lit and merry place differs by leaps and bounds from the artist’s personal biography. According to Rubiku, the work was inspired by her childhood days in Albania, a period in which sudden long power cuts that left entire neighborhoods in the dark, feeling helplessness and lack of control, were commonplace. In this context, the fragile, portable paper house functions as an antithesis to the dark reality, a fictive image that never really existed. At the same time, the energy of shared creation invested by the artist and her mother somewhat succeeds in transforming it into a real place. The traditional, modest, colorful “female” handicraft and the inviting light instill the art object with a refined essence of longed-for domesticity.

Anila Rubiku was born in Albania, 1970. Lives and works in Italy.