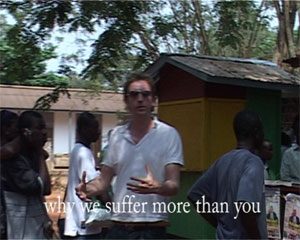 Ari Libsker presents four political speeches in which he “speaks to the people” on different occasions, such as on Election Day or during a trip to Africa. In these speeches, composed of meaningless texts interwoven with empty figures of speech, he performs in the public sphere, insisting upon making café patrons or bus passengers an attentive audience. The absurd situation, on the verge of harassment, elicits responses of embarrassment, silence, and avoidance on the part of the audience, in a brilliant satire of political demagoguery.