Asad Azi | Men in the Sun 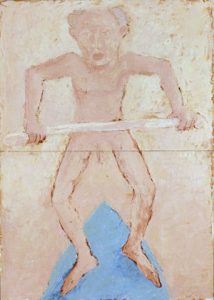 Asad Azi’s series of paintings from the 1980s are based on a local landscape-the Tel Aviv-Jaffa beach-employing it as a surface for a mythological story which generates tension between sanity and insanity, between ostensible serenity and erupting violence.

The fisherman series was created between 1981 and 1985, a period in which Azi already lived in Jaffa. The image of the fisherman is widespread in the history of art. The major Arab cities-Acre, Haifa, and Jaffa-were fishing centers, and this image, much like the sabra, manifests endurance, steadfastness, and tenaciousness, representing the continuity of routine Palestinian life in the coastal towns after the Nakba. The fisherman metaphor, however, does not only express continuity; it also serves as a testimony and reminder of the thousands of fishing boats which carried thousands of destitute Palestinians from these ports to the refugee camps in Saida (Sidon) and Beirut.

Purple Fisherman (1985), portrays a solitary fisherman surrounded by waves in shades of dark gray and purple; the ground drops under his feet, and he appears as though he is standing on the water. In the painting Fisherman in Profile (1985), a solitary fisherman stands on the pier, naked and vulnerable. The oil paint layered with a spatula on the paper generates expressivity and movement. Vivid red, the sea appears like a river of blood. In his hands the fisherman holds a pole-like rod as if trying to balance himself in the turbulent water. The sense of vulnerability is reinforced in Fisherman (1985), where a white-haired fisherman stands on a surfboard, old and naked, his conspicuous penis directed downward, at the boat. The rod in this work is a very short pole which he holds in both hands, very close to its end, to prevent him from falling into the water.

In Azi’s fisherman paintings the sea is far from a protected space; it is an expressive space threatening to swallow the solitary, naked, fragile human figure. A tension is created in the works between the image of fishing as a tranquil practice, a source of livelihood, and an arena signifying Arab identity and longing for the olden days, on the one hand, and the sense of a near fall into the water and ensuing helplessness, on the other.

The tension between the false tranquility on the beach and scenes of erupting violence is also repeated in the series “Mother and Child” (1987), painted against the backdrop of the first Intifada, and based on a recurring composition: a mother and child in bathing suits on the beach are seen on the left, the child’s face is erased and merely contoured. Two soccer players are depicted on the left, their feet swinging forcefully as they move foreword, toward the center of the painting. In some of the paintings the center of the binary composition changes, and is supplemented by a third element-the figure of the madman. In Mother and Child 2, the madman appears in the bent figure of a naked man with a protruding penis and a bird on his head. In this painting, the faceless child holds a cross, associating him and his mother with Christian iconography of the Madonna and Child. In Mother and Child 3, the same figure of a bent, naked madman turns its gaze away from the foot of one of the soccer players which strikes his hand.

The mother in the paintings appears vulnerable and limited in her ability to maneuver, protecting the child lying next to her; the madman is situated in the middle, in-between the two parties, further accentuating the scene’s illogical quality vis-à-vis the expressive body movements of the soccer players who comprise a senselessly moving mass. In Azi’s works, the masculinity-of both the naked fisherman and madman, and that of the athletes-is not translated into control and power capable of changing the figures’ fate. The mythological story offers neither real nor symbolical logic to the helplessness and vulnerability presented in the works, and the figures are ultimately fixed in a composition of frozen violence.

Born in Shefa-‘Amer, 1955. Lives and works in Tel Aviv-Jaffa