Asim Abu-Shakra | Men in the Sun 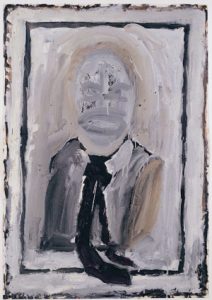 The image of the potted sabra in Asim Abu-Shakra’s works is one of the only Palestinian images to have entered the canon of Israeli art. The sabra image was at the core of Abu-Shakra’s one-person exhibition at Rap Gallery, Tel Aviv, before his untimely death, at the age of 29, and of his posthumous comprehensive retrospective at Tel Aviv Museum’s Helena Rubinstein Pavilion of Contemporary Art in 1994.

Concurrent to works depicting a potted sabra, Abu-Shakra painted a very different series of works on large-scale canvases centered on sabra hedges. He juxtaposed the domesticated, tamed, circumscribed potted sabra with an image of the Palestinian thicket-a bifurcated, threatening and boundless vegetal image. In Untitled (1988), multiple circles generate a thicket of sabra hedges which take over the entire canvas, threatening to break out of the frame. Black, orange, and red paint blots are scattered amidst the leaves in the bottom section, reminiscent of combustion, sparks of fire, and scorched earth. In this context, the sabra attests to the violence inscribed in the land by the occupier. In the painting Sabra (1988), the sabra hedges are delimited within a pointed, prickly frame, and the hatching rendered in-between them call to mind sharp glass shards. In another work from the same year, Sabra, the red sabra flowers appear like bloodstains. In these works the sabra hedges transform into a fortified wall, an impenetrable thicket which offers no shelter.

Unlike the potted sabra, which preserves the bifurcating relationship between the tree and its roots, the image of the boundlessly sprawling sabra thicket offers a different metaphor for contemplation. The sabra thicket refuses to become a national territorial marker or a landscape which is an agent for conveyance of cultural values. The sabra thicket is not a tree which indicates structure and genealogy within a stable, hierarchical array of spatial relations; it is not a landscape which delimits the geographical contours of the mountains and hills with forests and woods. The image of the thicket is juxtaposed with the traditional genre of landscape painting identified with European imperialism, which documented the hegemonic point of control over the landscape, leaving behind ruins and wreckage. In Abu-Shakra’s sabra thicket there is neither a point of control nor a focal perspective; the thicket is a signifier of multiplicity, of constant deterritorialization and ongoing violence embedded in the ground by and within culture.

This tension between violence and culture is discernible in the painting Self-Portrait with Necktie (1988). Representing European high culture, the tie is depicted as a weight, a foreign body, cutting the artist’s head; his face is marked by three circles, two eyes and a mouth open as if in a scream. His face is virtually assimilated into the background, compressed inward by the double framing and the same monochromatic coloration. The artist’s body is an armless torso. It is a portrait which voices a cry, holding onto the tie which deviates from the frame-possibly as a life line, possibly a halter. The portrait expresses the conflicts of identity and foreignness which accompanied Asim Abu-Shakra in his short lifetime.