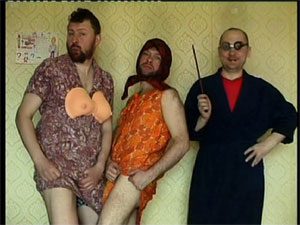 The three pieces of the Blue Noses Group-If I Were Harry Potter, 25 Short Performances about Globalism, and Illustrated Headlines-are introduced as a sequence of short visual jokes. Group members employ diverse, possibly-minimalistic possibly-amateurish means to present poignant, comic, and absurd verbal illustrations for current concepts pertaining to post-Communist Russian society and to Russia’s relations with the West, as reflected in the media.