Chen Ching-Yao | Boundaries on the Move 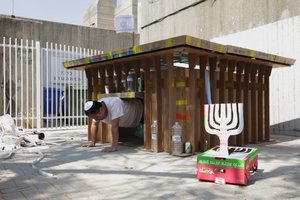 Today, the gap between the rich and the poor is widening in countries across the globe. Israeli youth recently staged a rally in Tel Aviv to protest against inflated housing prices, which eventually drew the serious attention of the Israeli parliament. Homeless Project takes the cardboard boxes vagrants often use for shelter as material to construct buildings which symbolize a nation’s supreme authority. For example, in an exhibition in the Unites States of America, the artist built the American White House. In Israel, he chose to build the Israeli parliament: the Knesset. Chen’s work addresses the social and civil issues stemming from the unchecked expansion of power, which is arguably a result of the housing bubble and free market policies