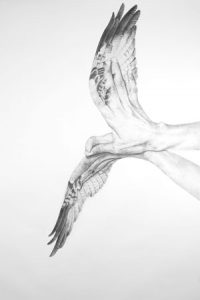 Dana Harel’s works take us, through their meticulous execution, to a subject as old as art itself: therianthropy (from the Greek therion which means wild beast, and anthropos which signifies human being)-the metamorphosis of humans into animals. Therianthropy has long existed in human mythology. The earliest examples appeared in ancient cave drawings. Later samples were found in the ancient Egyptian pantheon of deities such as Horus (who possessed a human body and bird head), Anubis (human body and jackal head), Amunet (human body and cobra head), Osiris (human body and falcon head), and the best known of them all-the Sphinx (human head and lion’s body). Hybrid creatures with human body parts continued to appear in the Assyrian civilization as well as in Greek mythology. The best known examples from the latter are the Chimera, the Centaur, the Griffin and the Sphinx. The motif of the “winged man” from Assyrian civilization was developed into the Hellenistic winged god Eros, and subsequently into the biblical Seraphim, who preceded the winged angels of Christian iconography. Harel adopts this ancient artistic tradition through her personal interest in treating the body as kin to all wild things. She presents the interaction of the body with its natural surroundings through an organic process in which animal creatures fuse with human skin and flesh, to create beautiful and fascinating hybrid combinations.