The exhibition presented by Dana Yoeli (b. 1979) consists of a two-part video installation: a bidirectional projection, and a puppet theater object. In this installation, she continues her examination of the aesthetics and ethics of the mechanisms of commemoration, conservation, and national memory and ethos that are encapsulated in conventional objects and ceremonies in Israel. Her engagement with this subject, which was already evident in previous sculptural installations of hers, stems from her personal experiences as the daughter of a bereaved family. But, no less importantly, it is an expression of her awareness of the collective sense of shared destiny that is ingrained in Israelis from an early age through the educational system and community institutions. Yoeli’s preoccupation with the mechanisms of commemoration and bereavement in her Olympia project transcends the autobiographical dimension, and offers a poignantly critical symbolic view of the Israeli public domain – at the national and the community level alike – that directs us to remember, to honor the fallen, to identify with the families’ loss, and to adopt the heroic narrative that is evoked through ceremony and cenotaph.
Yoeli’s choice to hold the exhibition at this particular museum is intimately linked to the mechanism by which cultural institutions and their agents establish national commemoration and memory. When the museum was first founded, its museum function was closely integrated with the commemoration function of the adjacent Beit Yad Labanim military memorial center, seeking to break away from the previous static nature of commemoration memorials by integrating them with community venues of secular, cultural activity. In 2000, however, during extension works to the museum (designed by architects Yacov and Amnon Rechter), the museum entrance was detached from the memorial building, in favor of a new, direct entrance on its northern side. This disengagement of the two functions is currently being reassessed by the museum. 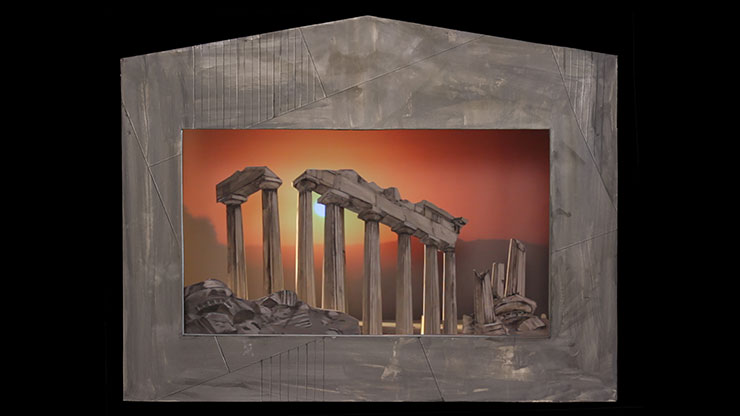 Yoeli’s work examines the relevance of classical commemoration formats and their epic and heroic aspects as employed in local cenotaphs and commemoration spaces, particularly in the face of a waning Zionist ethos and the continuing erosion of the cohesiveness of Israeli society. To that end, she contrasts the local and peripheral formats of military memorials and cenotaphs throughout the country with the models on which they are based, which are drawn from Classicism, German Romanticism, and Modernism.
One of Yoeli’s films presents the camera’s slow roaming over a series of imaginary memorial and heritage sites suggestive of the remains of some modern-classical culture at an abandoned location. It is a dystopian vision that laments the erosion of matter by time – the very element that it seeks to obliviate, erase, and eliminate. The second film documents meticulously performed ceremonious acts that follow an enigmatic protocol. The ceremonious acts are presented through the façade of a theater – which is also presented as an actual sculptural object in the exhibition space. At the heart of the existential paradox in Yoeli’s Olympia lies the disparity between, on the one hand, the authentic and personal pain of bereavement and, on the other hand, the mythical, national mechanism of commemorating the heroic action.