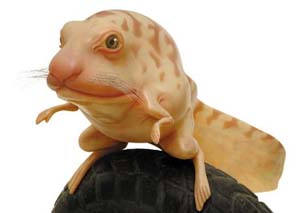 In the exhibition Civilian Applications a “technological salon” is created, presenting civil implementations of military technologies. A desolate and degenerated world becomes fertile ground for the revival of a new evolution that works diligently on repair.
[…]

When the political chooses to be manifested by means of a fantastic rhetoric, it makes a sharp turn, which may be unexpected or self-evident, to the practice of estrangement. […] Gur Arie’s works stretch the strangeness to the uttermost limit, and produce what at first glance are sated objects, objects that celebrate a rich existence, that possess an aesthetic resilience, a hermetic visual economy, bounded by beauty made extreme, imprisoned in an appearance that at first glance nullifies every kind of consciousness; too beautiful to ask questions, too spectacular to be troubling. On this basis begins the peculiar negotiation that Gur Arie’s works conduct with the world.

[…]
What at first appears in Gur Arie’s works as a world bustling with life, which exists under the rule of surrealistic logics, soon reveals itself as being opposite to such a rule: the plethora of strange, unexpected couplings, each possessing a credibility that is immediately refutable, are an outcome of borrowing from sources that are more familiar and accessible than seemed to be the case at first sight. The range of literary and visual proposals offered by science fiction, as literature and as cinema, the visions engendered by the advertising world and by graphic, fashion and product design, reveal themselves as the works’ source, more than the depths of consciousness and the psyche. In actuality, the relation of the works to these images is one of “realistic” translation. Fictional, man-made images function as both sources and objects of the realism of the works.
[…]

The images that Gur Arie uses sometimes look as though they have been chosen in order to justify the patina, to suit the surface that he streamlines so diligently. Technology offers the image, which, after it is actualized, produces a comment on technology. But the works do not celebrate abundance of any kind. On the contrary, what is seen through them is a scanty world that is in need of continuous acts of invention, of enrichment with renewed eros. […]

The surfaces of the works (a product of spray painting and various epoxy varnishes) are also responsible for an element that is of the essence in Gur Arie’s works – their opticality, which is in excess of their “sculptural” existence. They are experienced more as a phenomenon, as a kind of appearance, than as a mass of material that takes up space. There is a feeling that the works first maltreat the eye and only then address themselves to establishing relations with the scale of the viewer’s body. The way the surfaces are processed and painted brings the works closer to the world of 3D simulation and computer processing, arenas in which the body and the world of relationships that it activates are pushed to a place of no relevance. The severance of the images (in the works) from any kind of surroundings, circumstances or contexts accords them, more intensely, a virtual savor that is not dependent on a concrete space. It is a “cut and paste” presence. This severance produces an emergence of the image, and augments the moment of its appearance over its continuous presence in the space. I would like to claim that in Gur Arie’s works the luster, for example, is a more critical element than the scale. The next part of the claim is that their presence is actually “anti-sculptural”, and closer to the medium of photography and to language.
[…]

The works establish for themselves an immaterial status of a diagram or a flow chart. Anyone who holds them will hold not the thing itself but only the most trenchant actualization of the thought about it. Even the creatures that appear like the fruit of an alert imagination touch, incidentally, on a limitation of imagination and knowledge – they do not produce entirely new forms; rather, they create strange variations of familiar life forms. In this way they actualize the sensation that is aroused when watching nature films on the television science channels such as National Geographic, which introduce the viewer to remote life forms. In the viewer’s encounters with the esoteric life forms that are revealed in these documentaries, a sensation opposite to fiction is aroused – a sensation of limited familiarity with what exists in the world, of “we didn’t know such things existed”. A further dimming of the sense of fictionality is effected by the absolute dependence of these creatures upon components and objects that are connected with the familiar. […] Within this conflicted world, where utopia and nightmare intermix, creation or growth are possible only on a symbiotic basis – each living creature appears in it as lacking a separate existence, after being totally assimilated in man’s technological vision. Each work produces a closed system of existence, which builds a world that sustains symbiotic relations between man-made creatures and living things, and therefore does not produce something that is totally estranged from the human.