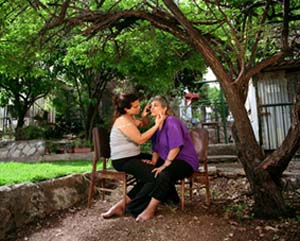 Eyal Gaziel presented the current series in the early summer as part of the graduates’ exhibition of the Photography Department at the Bezalel Academy of Arts and Design, Jerusalem. Gaziel was born and raised in Kiryat Tivon, in a nameless neighborhood. The series of photographs is based on his childhood memories interlaced with the memories of his mother and father who lived in the place when it was still a transit camp. Gaziel documents the people who play themselves in staged photographs: the weeping child, mad Herzl, Tikva who waits by the side of the road, a father cutting his son’s hair, children by the steps of a house, a funeral procession waiting to set out.

Children’s fairy tales assimilate with the world depicted by Gaziel, a world where people long for something to happen. The scalding of vessels for Passover seems like the backstage of the Cinderella tale, like cleanups after the ball. The boy with pants pulled down by the side of the road, is Little Red Riding Hood.

“In my childhood days everything was clear and neatly-ordered,” says Gaziel, “each one had a set role. In those days I couldn’t tell that Tikva, my babysitter, didn’t really wait for the 75 bus that never came, that that was her spot, and everyone knew that. I can’t remember when I realized that there was something wrong with Herzl, the only adult who understood me, and that plucking moustache hair was just an excuse for all those secrets that had to be whispered…”