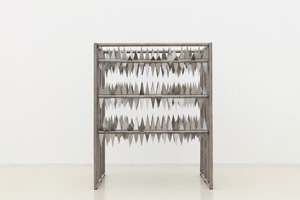 Fabrice Gygi’s work often refers to the viewer’s physicality and gaze. His works represent and define area and action by way of site-dependent installations and functional public structures, which speak to “the often unnoticed architecture of authority in urban environments” by means of appearances of “objects such as bleachers, crowd-control barriers, podiums, loudspeakers and tents [which] become stripped of their civic or military utility and charged with an ambiguous political character.”[1] Gygi’s architecture of power, those abstract structures of a mysterious authority, shows us that the relation between subordination on the one hand and knowledge and recognition on the other is not necessary, that power can also be a function of design. His art sets the conditions for participation and active involvement; however, the realization of the works’ activist social potential does not offer a utopian space, in the framework of which a work of art might participate in the historical realm, but threatens to use violence.

Gygi “appropriates the materials and instruments of urban structures to present a multilayered critique of the authoritarian systems in our culture.”[2] Actually, he mimics the effect of these mechanisms, but without characterizing them unequivocally and, more importantly, without ultimately operating them. Watchtower, polling station, road barrier, cage, boardroom, or a tribunal tent – to mention the structures and surroundings of some of his famous works – are left orphaned, neutralized, devoid of any use. And in this context, Gygi’s works are either a prototype (future action) or environs that have been deserted (past action).
The two works on display at the exhibition conform to the lines of discourse sketched above. The first is an open steel cell crisscrossed by horizontal bars bearing serrated blades, a sort of Kafkaesque torture device, and the second is a collapsed sack made of black leather, which might have emerged from a dungeon of sadomasochistic practices. The works attest to potential activity as well they do to an act already performed, and the suspended violence in them, that which will never be actualized, becomes a possible sanction.

Courtesy of the artist and Galerie Chantal Crousel, Paris