Fahed Halabi, Ala Farhat | Men in the Sun 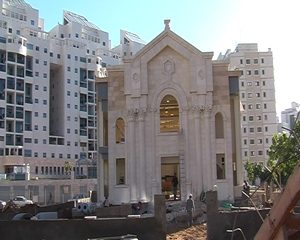 Fahed Halabi and Ala Farhat are Syrian artists whose joint artistic practice is based on their work in the past decade as construction workers, day laborers, and contractor workers. The video Working Day (2009) describes a workday in the building site of the stately Georgian Synagogue in Ashdod. The video artists, Halabi and Farhat, specialize in the construction of columns which follow the Ionic and Corinthian orders, in classical Greek or Roman style, reeding and fluting the columns. The new building, with the Star-of-David at the façade, is decorated with tall pillars, standing out as deviant against the backdrop of Ashdod’s neighborhoods.

The camera oscillates between the carving work taking place on the scaffoldings surrounding the synagogue, and the conversation of the Palestinian construction workers taking place at its foot. The conversation centers on the story of a young worker of Gazan-Palestinian origin who arrived in the Israeli city of Or Yehuda as a young boy. With much sincerity he exposes the intricate politics of identity typifying his life with his Jewish friends, his Palestinian friends in Israel, and his childhood friends in Gaza, saying: “If I were in Gaza now, if I still lived there, I believe that there would only be a picture of me on the wall-a shahid (martyr).” Throughout the conversation he identifies with innocent people being hurt both in Sderot and in Gaza, among them his friends killed in the recent war in Gaza.

The builders’ conversation employs a mixed slang blending Hebrew and Arabic, biographical exposure, class consciousness, and personal and political criticism. Together all these generate a complex identity of otherness, which includes an Arabic-Syrian identity on the northern Golan Heights, Palestinian identity in Israel, and Gazan-Palestinian identity, raising questions concerning alienation, identification, and yearning.
Fahed Halabi, Born in Majdal Shams, 1970. Lives and works in Tel Aviv-Jaffa.

Ala Farhat, Born in Buka’ata, 1977. Lives and works in Tel Aviv-Jaffa.