Hadas Ophrat (b. 1950) presents a multidisciplinary art project based on his research into the Villa Capra – also known as “La Rotonda” – outside Vicenza, Italy, designed by the Italian architect Andrea Palladio in the second half of the sixteenth century, as well as a multitude of its replicas around the world. This historical museal-architectural site is currently the residence of Count Ludovico Valmarana, and is also open to visitors twice a week.
The “white cube” of the museum gallery serves as a “large stage” for the white stage-like structure presented by Ophrat. This structure is a reconstruction of the bottom part of the Villa Capra stairs as an empty stage, referencing the outline of the whole building’s perfect form. Visitors are invited to enter the structure in small groups. Within the round room at its center, a video-art screening simulates a combined view of the Villa Capra’s interiors and of the landscape surrounding it. It is, in fact, a meta-landscape that, combining interior and exterior views and echoing the multiple reflections in the reiterated reproduction of the original building and its projecting porticos, presents the viewer with fragmented and overlapping sequences of space and time. 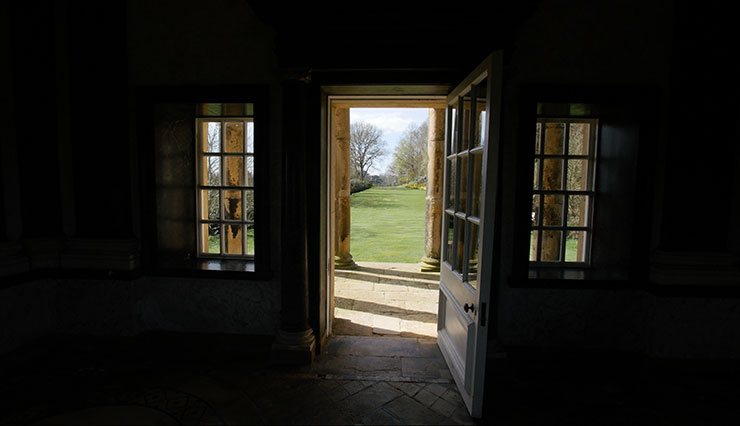 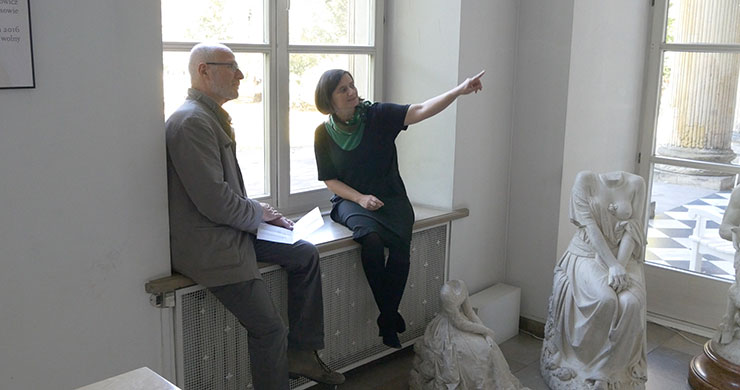 Leonardo da Vinci’s famous drawing of the Vitruvian Man is a clear example of the paradox of Renaissance structures. On the one hand, it is derived from human proportions, but, at the same time, it ignores the essence of man as a flawed, mortal creature, in utter contrast to the utopian, eternal geometric ideal it portrays. This idea is expressed by a 2014 work by Ophrat titled The Perfect Crutch, which presents a conflict between a crutch and a circle. Villa Capra’s doors were designed by Palladio in perfect symmetry, in keeping with the geometric ideal of beauty. They allow the villa’s inhabitants control of the space around them, and thus embody their eternal possession of it. However, the unique design of the family villa has given preference to formalism and the perfection of outward appearances over consideration of the inhabitants’ needs.
What does it mean to live in such an iconic utopian villa, either in the original building or in its numerous versions around the world – in England, Poland, the United States, or on top of Mount Gerizim near the city of Nablus in the West Bank? Documentary films and interviews with people who live or work in these buildings present an inquiry into the circumstances in which reproductions of the building were built; into the boundaries between the private and public spheres; into daily activities in the house; and into its maintenance and preservation efforts.
The stage, rituals and rites have long been part of Ophrat’s performances and visual theater. In a performance to be presented several times as part of his current exhibition Ophrat will draw in gravel on the museum floor a representation of the paths surrounding the Villa Capra in Vicenza. He will do so kneeling on a low cart as a representation of disability – and using crutches as his drawing tools. His manual labor will also render present the Sisyphean work of the laborers who served their master, the villa’s owner. Ophrat’s current project is an extension of his former artistic processes, expanding the range of connections he draws between the Real and the Symbolic orders, between the temporary and the eternal, between the universal and the local, and between the human and utopian.