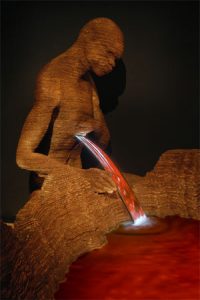 Itamar Jobani’s sculptures compose scenes of a mythical nature – simultaneously primeval and apocalyptic. At first glance the sculptures look like stone sculptures, reminiscent of figures in the art of ancient east. Approaching the sculptures one can see that underneath the red soil coating, the figures are constructed like topographic models, merging in the rocky landscape next to them. The monolithically – physical as well as conceptual – of sculptures made of stone, is transformed into the modular mobility of scientific models and virtual projections.

The figure Jobani presents in the sculpture Dam Adam Adama (Blood Man Earth) expands a gap in its stone-like torso, out of which flows blood, like a biblical miraculous act. The identity of the figure remains ambiguous – at times it appears to be an earth deity creating the earth from the liquid of life, and at times a man drawing his blood to feed the land. This identity between earth and the male body, stands in opposition to the conventional mother-Earth. In this world the symbiosis between man and nature passes through the blood, which literally flows like rivers, both nourished and nourishing the figures absorbed by it, and joins them to create the trinity Blood Man Earth, which dominates both history and present of the Middle-East.

In Invalid Topography the political relevance of the mythical-looking scene is emphasized, as man’s assimilation in the earth is manifested in the struggle between two territorial entities, one grabs and threatens to swallow the other whole, in an allegory of an invalid earth.

Narcissus is a local contemporary variation of the Greek mythology of Narcissus. The pool, which from a distance seems silent and still, is in fact an interactive video projection. As viewers approach the sculpture of Narcissus, their images is projected/reflected in the red pool, and the virtual water respond to the viewer’s movement in space, as if they were moving in the virtual world of the image. In a contemporary Israeli allegory, Jobani’s Narcissus is a territorial entity, who has lost its head in the virtual image of rivers of blood. Its head immersed in the projection, it is detached from its real surroundings, dragging the viewer with it, deep into that violent bleeding image.

The encounter created between the primeval and the contemporary echoes the complexity of Israeli society, in which the biblical merges with state of the art technology, and reflects the violence and ideologies dominating Israel.