“You know what you are doing, because you live a certain way, and the work stems from this life.”
–Jan Henle 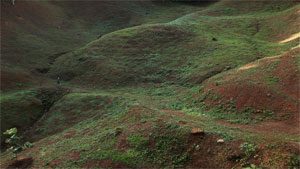 Jan Henle’s video documents the process of creation and development of a “living sculpture” near the town of Maricao in the mountains of southwest Puerto Rico over a period of eight years (1999-2007). The point of departure for Henle’s work, who has been working in the Caribbean Islands since the 1970s, was an abandoned coffee plantation overgrown with tropical vegetation. The artist cleaned the site with the assistance of jíbaros (Puerto Rican mountain men), who used simple tools, such as axes, machetes, and spades-traditional, handheld tools whereby the texture, color, and form of the earth were exposed. In the next phase, indigenous hardwoods were planted on site (species which were virtually extinct in part).

Albeit a monumental earth work-in terms of both the duration and the expanse of terrain it spans-Henle’s work is underlain by a reversed sensitivity to the aggression associated with some earth works. Henle does not alter nature’s original course, but rather strives to expose and reconstruct the natural beauty of the place by rehabilitating the damage left by one of Puerto Rico’s largest industries. He does so with nonaggressive means, using native methods which were bequeathed from father to son, and with the help of local farmers, thereby rehabilitating not only the land itself, but also man’s affinity with the place in which he lives. Not accidentally, the major act involved in the sculpture’s creation is one of cleaning, exposure, and reduction; by the same token, in its “finished” state too, the site stands out as a vacant breathing space vis-à-vis the thick vegetation engulfing it.
The viewer can experience the sculpture either by visiting the site or by viewing the film that documents a man’s journey through nature and time. For Henle, the process of creation is equivalent to the work itself, therefore the film focuses equally on the various elements involved in the project’s evolution (which continues to change, even after its completion): the interaction between artist and nature, between the native inhabitants and nature, between the artist and the locals, the work mode, the passage of time as reflected in nature, and the highly nuanced poetical impression left by the physical labor in the spectacular nature, a type of Zen garden inviting the viewer to undergo a differently-paced reflexive experience.
Jan Henle was born in New York, 1948, and spent much of his life in St. Croix in the Virgin Islands. Currently lives and works in New York and the Caribbean Islands.