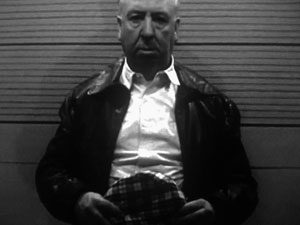 Johan Grimonprez’s film “Double Take” was inspired by Jorge Luis Borges’s essay “25 August, 1983”. In this story, Borges casts himself as a character who has a double, thus creating confusion regarding the real identity of the story’s author.

Grimonprez’s film is concerned with the influence of television both on the public’s perception of historical events and on actual historical developments. The film’s double narrative is based on two main themes: the cold war rhetoric of the late 1950s and early 1960s, and a fictional meeting between Alfred Hitchcock and his (older) double. The motif of doubling is related to the following “rule,” which is announced by Hitchcock at the beginning of the film: “They say that if you meet your double, you should kill him, or else he will kill you…” Who will kill his adversary, Hitchcock or his double? And who will win the cold war, the Soviets or the Americans? “Double Take” is constructed like a suspense movie that could have been made by Hitchcock himself, yet is interrupted by commercials, much like a TV program.
In the famous “Kitchen Debate” that took place between Nikita Khrushchev and Richard Nixon in 1959, Nixon teasingly says to his adversary: “You might be ahead of us in satellites for exploring space, but we are ahead of you in television.” History, as this film reiterates, is written by the winners. As Hitchcock states at some point in the film: “The murderer will tell the story.”
“Double Take” includes American newsreels from the 1960s that apprehensively present the technological advances made by the Soviet Union’s space program (including the successful mission conducted by Yuri Gagarin, the first Russian cosmonaut). At the same time, the film may lead us to conclude that the influence of the “American way of life,” diffused through television and Hollywood films, ultimately conquered the world’s imagination, and was a crucial factor in bringing about the fall of the communist regime.
G. L.