Joshua Neustein was born in 1940, Poland. Lives and works in New York.

The Hertzliya Museum of Art is dedicated to contemporary art, which inherently delves into day to day circumstances of public and private existential issues.
Upon the opening of the new wing i endeavored to feature a work of art that engages both the architectural aspects of the building and Israeli reality.
It seems fitting to conclude Neustein’s series of ‘ash cities’ with the installation “Domestic Tranquillity, Bne Brak” In Hertzliya, following the installations in Winston Salem North Carolina, Berlin, Warsaw, and Cleveland Ohio.
In the ‘ash city’, the museum floor is covered by a powder gray, moist ash. A map of the city and its streets is shaped of the ashes. Suspended from the ceiling is a massive crystal chandelier that marks, all but touching, a “place” on the map. The question arose, which city would be designated on the floor of the museum’s immaculate new space, Herzliya, Beirut, Gaza or Bne Brak? Neustein chose Bne Brak.
Each of the aforementioned options embodies crucial conflicts, which divide the nation, and allude to issues fundamental to the State’s survival: The withdrawal from Lebanon; The Palestinian Authority; the complex interactions between the religious and secular. A parallel and ongoing dialogue conducted by Neustein with figures in the fields of art, literature, and philosophy addressed the same concerns. 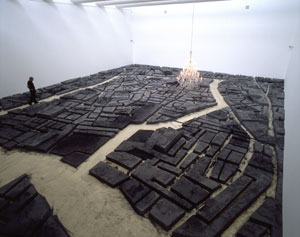 In his catalogue essay, Professor Arthur Danto wrote: “The work of Joshua Neustein seeks an internal relationship to the space and indeed the site of the museum.The artwork is not in the space the way an object is in a box: it incorporates the space into itself in such a way that one does not enter the gallery to experience an art work separate and detachable from it – one enters the art work itself, that defines the pavilion as part of the art.
Neustein lives in New York but the smoldering passion of his work is embedded in Israel. One need only mention the burning airplane in the work “Still Life” 1983 that addressed the conflict over the Lebanese border; “Gold Shit” 1987 that focused on the “Intifada”, “The Blind Library” outside Beit Ariela Library Tel Aviv, 1997.
Dalia Levin, Museum Director