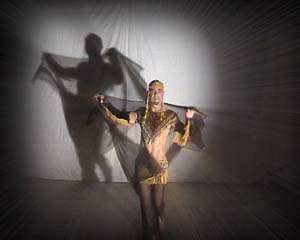 Kader Attia was born in France in 1970 to a family of Muslim emigrants from Algiers. His work, mainly in photography, video and installation, reflects the bleak socio-political state-of-affairs in France that is forced to deal with millions of North African Muslims who have lost all hope of assimilating into French society. As a member of the North African community, Attia explores the identity struggles of his uprooted culture vis-à-vis the seductiveness of Western affluent society and consumerist lifestyle, employing critical self-reflexivity rife with humor and cynicism. His work is rooted in the duality of these radically different worlds.

Loose Weight is presented on the concrete wall at the entrance to the museum. It consists of three “billboards” ostensibly advertising an original method of losing weight via kneeling (for Muslims) and swaying (for Jews). The video Shadowdepicts an ecstatic, erotic belly dance performed by a male dancer for the camera. The poetic tension embodied in the act of dancing is enhanced by the interrelations formed between the dancer and his silhouette flickering on the wall. The dancer’s well-defined, muscular body and his extroverted masculinity lend the belly dance, which is considered a quintessential feminine act, a subversive power. The film’s protagonist is the artist’s friend, Sammy Gamal, a not very young man of Algerian origin, who works in a prestigious delicatessen during the day, and at night assumes the figure of the much-admired mythological Egyptian belly-dancer from the 1960s, Samia Gamal.

Both works are strewn with conflict and ambiguity. In Loose Weight Attia ironically addresses the conflict between religion and the consumerist world, whereas in Shadow he refers to the rift between “divergent” Muslim masculinity and traditional, religious values. These pieces reflect two contextual directions also evident in Attia’s earlier work: on the one hand, social criticism pertaining to the clash between cultures, and on the other – “anthropological” photography that focuses on the immigrant community, touching upon questions of identity and gender. In both these channels Attia reinforces the gap between stereotypes and fantasies, ironically ridiculing the craving for brand names in the North African immigrant community.

In recent years Attia has developed a special interest in the horror of Islam as experienced in the Western world since 9/11. His ironic stance is directed at both religion and Western consumerist society. Opting for the consoling lap of religion is tantamount to adoption of the right brands. In both cases, he argues, we are concerned with a cynical exploitation of human misery.