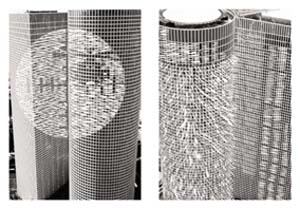 “Observing Maya Cohen Levy’s new works from a distance may be confusing: one is confronted with monumental photographs of Tel Aviv’s Azrieli Towers, painted, as it were, with various patterns of white stripes – closed or freely scattered geometrical patterns – as a contrastive encounter between the three-dimensional photographic representation of the towers and the two-dimensional, flat, stripe-stain structures smeared on or attached to them. A closer look, however, reveals that the artist attached nothing to the photograph, nor did she smear any paint on it, but to the contrary – she cut it so that the surface of the photograph, the white surface of the paper, appears behind the photograph and through the black-white-gray forms represented in it. The resulting collage is not the outcome of an act of superimposition and addition, but rather one of subtraction: Maya Cohen Levy sculpts photographs – physically.

[…]
It thus appears that the act of subtraction – in itself the source of a new visual image – is not merely physical; it also embeds the symbolization of an associative realm that re-signifies the dominant images of the towers presented in the photograph. This is especially conspicuous when the physical subtraction in the photograph generates the silhouette of an airplane within the uncut sections of the tower expanses: the threatening-dramatic association inevitably invoked since 9/11 by a link between ‘tower’ and ‘airplane’ is reinforced and more forcefully felt, despite – or perhaps because of – the fact that the silhouette of the airplane appears on the photograph as an empty image, a phantom of sorts, a constantly-present-catastrophic-possibility, or if you will: as a potential of destruction dialectically embodied by the seemingly solid firmness of the tower.

[…]
Incidentally, something unsettling is revealed: Maya Cohen Levy’s works are beautiful, at times ravishingly beautiful, even when the theme of the work (or the particular image addressed in it) is not only not-‘beautiful,’ but even ugly or truly horrifying. Are we concerned here with an inconceivable gap between form (beautiful) and content (horrifying)? With an improbable contradiction between ‘evil’ and its attractive representation? To some extent, this is indeed the case. But this contradictive gap is not necessarily spawned in Cohen Levy’s works; it is, in fact, embodied in the real ‘beauty’ of the objects she treats artistically: the formal beauty of the Azrieli Towers is deceiving with regard to the contents of capitalism and its essence, embodied in them, just as the elegance of the various airplanes appearing in the works might deflect attention from their violent purpose. In this sense, the tension between the stylized beauty of the representation and the ugly-catastrophic of that represented in Cohen Levy’s works, imitates the reality she sets out to address – albeit a fundamentally ironic imitation. While the beauty obeys distinct design principles and aesthetic standards of artistic arrangement of materials, it is allusive. One cannot yield, even for a split second, to the spectacular compository beauty of the works without feeling a certain sense of discomfort invoked by the very tendency for indulgent surrender. The beauty is disconcerting, just as the ‘production values’ experience and the ‘special effects’ association of the real plane crash into the Twin Towers on September 11, 2001 were contrasted blatantly to the horror of the catastrophe and the dimensions of destruction inflicted by the crash. […]”