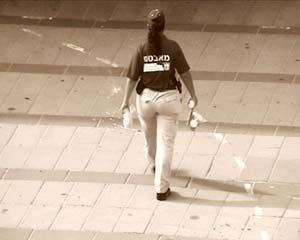 The film’s plot unfolds to the sounds of rhythmic classical Western music. Melanie Daniel’s camera follows the occurrences in a schoolyard during break time, and uses the sounds to analogize between the school drama and the drama in the Western. Ostensibly infused with an innocent atmosphere, between a game of hopscotch and dance exercises, other “extracurricular” activities are revealed in the yard: small shoves, grappling, and chasing implying hidden, potential aggression and violence. The schoolyard becomes a miniscule battlefield under the overview of the security officer, who is likened to the “local sheriff.”

The title of the work is borrowed from the 1952 Western High Noon, and its soundtrack is the theme song from the mythological American 1960s television series, Rawhide. These allusions and the fact that the film was edited using a sepia filter accompanied by flickering and scratches, charge it with the warm nostalgic aesthetics of olden Western classics. Daniel empties the film of color, thus eliminating personal qualities and creating a uniformity and equality between the characters. The use of monochrome and the acute comical Western metaphor transform the schoolyard into an archetype for any place and any society, and an allegory for life, human nature, and the buds of destruction and violence embedded in it.

The work provided Daniel with an opportunity to return to her childhood realms and stories, to the chronicles of her family members who raised cattle in Western Canada and fought against rustlers, real estate developers, and the like. Daniel takes the children in the yard on a journey into memories of her family’s past, creating an imaginary setting whereby she flees the local reality, clinging to the spirit of a time in which she finds refuge for herself and for her work.

Melanie Daniel (1972) was born in Canada. Lives and works in Tel Aviv and Herzliya.