Michal Chelbin | Dialogue with the Classics 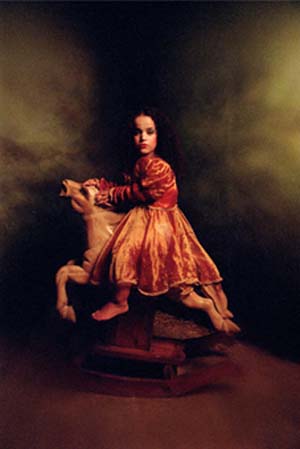 Michal Chelbin’s photographs are infused with atmosphere and motifs alluding to various levels of the history of art. They carry the viewer on a journey in time, from the Baroque to the Romantic and Victorian periods; from Giovanni Battista Tiepolo’s ceiling frescoes to Julia Margaret Cameron’s photographs, evoking connotations of various artists, from Caravaggio, Velázquez and Vermeer to Fuseli and Delacroix.

It is perhaps not surprising that these works promptly call to mind references to artists of the past, since most of them were created following the artist’s journey to Italy in 2000, a voyage in the footsteps of Caravaggio’s works. The dramatic lighting and sharp chiaroscural contrasts in her photographs undoubtedly reveal the influence of the latter’s works.

The viewer of Chelbin’s works surmises that the photographs have a clear iconographic origin. Except for a few instances, however, this is not the case; Chelbin incorporates elements from different periods and works in her own, so that the final result is hers and hers alone. The photographs, all executed in her studio, are typified by meticulous composition, at times charged with the sense of a dark, foreboding narrative, a sense heightened by the gloomy background enveloping them. This element is especially conspicuous in the multi-figured photographs that appear to depict scenes from Dante’s Inferno.

Only rarely, as aforesaid, do the works rely on a clearer iconographic origin. Thus, for example, the photograph portraying a girl-woman-midget on a rocking horse is a blend between Velázquez’s well-known painting Prince Balthasar Carlos on Horseback (1634, Museo del Prado, Madrid) and the dwarves he so masterfully depicted. It is not accidental that the photograph possesses painterly qualities reminiscent of Spanish Baroque pieces. Such is, for example, the photograph of the luscious woman with only a fig leaf covering her nakedness, in homage to Juan de Miranda’s painting (ca. 1680, Museo del Prado, Madrid).

Notwithstanding and despite the numerous references to the art of the past and to Christian iconography (such as the Pietà), Chelbin’s works belong to the here-and-now, evoking a timeless air. Chelbin presents us with humane figures that are somewhat deviant and different; figures occupying the twilight zone between serenity and distress, existential safety and the fear of a perilous fate, a dichotomy that is not unfamiliar to a 21st century viewer.