The question of movement is a fundamental motif in Rothschild’s projects. Her work questions situations both impossible and hypothetical, involving the interrelations between time, space, movement, and observation, in order to explore the connections between mental, personal spaces and political public ones. 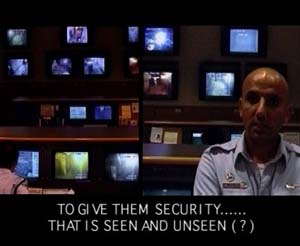 The installation Vision 2004 investigates the relationship between restriction and limitlessness through simultaneity and contrast. The Old City of Jerusalem is seen from the perspective of a police control room and from the lens of a camera floating through the narrow and empty Old City alleys at night. In 1998 the Israeli police launched a surveillance project named ”Mabat 2000.” Nearly 300 cameras cover the entire Old City around the clock. The installation contrasts a floating motion through the city with shots from inside the control room and a frontal interview with a police officer. It sets out to explore who the real “master of sight” is. A life-size format of the projection creates a virtual effect, changing the viewer’s orientation within the space and creating an effect of mental architectures travelling in a specific political present.