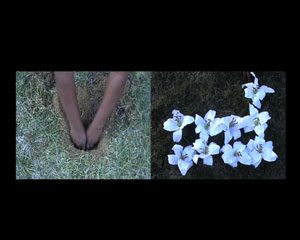 A Woman’s Intermezzo
Michèle Magema draws from her experience as a child exiled from her homeland. Today, as she develops her art, Magema examines the history of her people; the history of Congo (formerly Zaire), the land of her birth, a former Belgian colony turned dictatorship after the African states obtained their independence in the Sixties. Slavery, genocide and internal wars are also a major focus in her work.

Her work exists within an intermediate zone, a sort of a mental space or a frontier that she created, which she situates between the “South countries” and the “North countries”.
The exploration of her feminine identity displaced through time, memory, and history, reflects an image of a woman with a new identity that is totally detached from exoticism.
In Fleurs de Lys, Magema digs into the soil with her bare hands. The soil from which thousands of men, women and children were torn, thrown into the heart of darkness and stowed on ships to become minorities in other continents. It is the soil on which they landed, skeletons reduced to dust, buried with their chains. Every flower delicately posed on the soil is a wounded soul Magema sets free, while the pretty scented lilies symbolize monarchy in France, Michèle Magema‘s land of asylum.
Michèle Magema lets both her revolt and her hope come to light, her questions and her wisdom. Devoid of any exoticism, her work is that of a free spirit, contemporary and critical. Through her works which are imbued with intimate womanhood, she addresses fundamental points in the history of mankind. She walks the line between the limits of personal experience and the wider outlook afforded by shared collective anxieties.