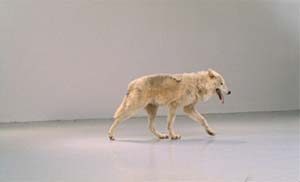 Mircea Cantor continues to explore hierarchical power structures; this time, however, in the video Deeparture, he applies his investigations to animals. A wolf and a deer were put into an empty gallery space in Paris, and the artist documented the unexpected, strange encounter with his 16 mm video camera without sound. The two animals circle each other suspiciously. The lens alternately zooms in and out between the gazes of the frightened, alert deer and the indifferent, calm wolf. The unnatural situation positions the viewer in a state of curious alarm and unclear expectation for future developments, as the pressing silence and endless loop reinforce the drama and the sense of tension.

The animals seem to have managed to come to some compromise and a “matrimonial reconciliation”; the wolf’s decision to ignore and avoid attacking has kept a status quo. The work alludes to Isaiah’s Vision of the End of Days, “and the wolf shall dwell with the lamb,” concealing political and social implications on the global level as well as in the local Israeli context. Beyond the symbolical interpretation, the work explores the boundaries of the gallery and the customs of art consumption and comprehension.

The use of animals calls to mind other examples from art history, among them Joseph Beuys’s famous performance from 1974, I Love America and America Loves Me, where the artist spent three days in a New York gallery in the company of a coyote. Unlike Beuys, whose performance was intended to help American society become aware of its wounds in order to heal them, Cantor strives to effectuate a “deep process,” the camera follows the animals’ conduct in an attempt to reinforce and deepen its gaze as much as possible.

Mircea Cantor (1977) was born in Romania. Lives and works in Paris.