Blue sky (painting), suspension and leaning (sculpture), seeing and masking (poetry) – in the work of Miriam Chalfi (ca. 1917–2002) each field touches on another, and an enigmatic, unexpected element is inherent in all. “When I close my eyes/ I see,” she writes in her poem “Bare Eyed.” Chalfi’s work is one organic whole comprising antithetical worlds: the crude and the crystalline, being and non-being, consolation side by side with a gaping abyss; a precarious balance.

Chalfi was drawn to art from an early age, but orphanhood and hard work did not allow her to develop as an artist before she reached the age of thirty. In 1926, as a young girl, she immigrated to Israel from Poland with her father, Baruch Sternbaum, her sister and three brothers. She built her life in Tel Aviv, working hard from early childhood to take care of the family, and studying in the evenings. Later on, she joined her life to that of Shimshon Chalfi, and their daughter, Raquel, was born. In the 1950s, while the family lived in Mexico, where Miriam and Shimshon engaged in educational work, she began studying sculpture. In later years her poems were published, in the books In the Midst (1992), Longing (1999), and the posthumous Voices of Stillness (2010). Chalfi continued to create in both fields (and also painted), and her poetry is deeply connected to her sculptural work.

There have not been many women sculptors in Israel. It is a field that demands physical and mental strength, working space and storage room, all of which Chalfi lacked. “When you love something you don’t think about the difficulties,” she said to her grandchild in a conversation documented in a film-in-progress by her daughter, Raquel Chalfi, excerpts of which are on view in the exhibition. Miriam Chalfi’s sculptures were included in the prestigious exhibition “Eighty Years of Sculpture” (1984, curated by Yigal Zalmona) at The Israel Museum, Jerusalem, which presented the story of sculpture in Israel. Yet her work remains unknown to a great extent. This may be due to the fact that contrary to the iron sculptures of her male counterparts, her sculptural work is intimate and its spatial orientation is neither possessive nor aggressive. As she writes, “From all that was not fulfilled in me/ from my absence of strength –/ Power entered my soul/ to create/ angels of stone.”
Chalfi’s sculpture emanates a sense of introspection and free movement of thought. Like her poetry, it contains yet is wide open. Even when minuscule, its inner scale is monumental. Aware of the secret of the essential, it leans toward the ground, the horizon, the dome of the sky. Both Chalfi’s poetry and sculpture are characterized by oxymoronic, liminal states, and their enigmatic aspect is often quite sober. The feminine element bridges the unbridgeable gap between fullness and nothingness:

Time has come
and I am a Woman-Queen

A Woman-Queen I say
With no qualms I say

But one who conquers her own heart
and falls
in battle

1 Miriam Chalfi’s poems are translated by the poet Raquel Chalfi, her daughter. 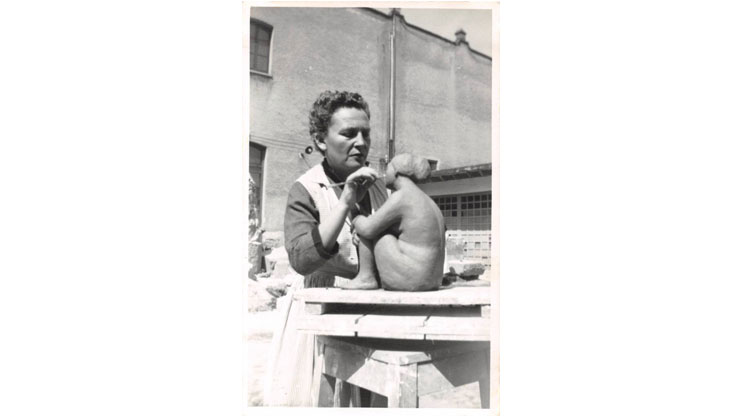