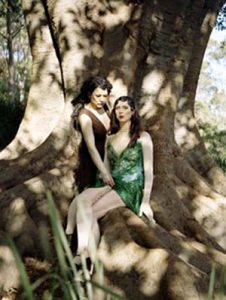 The video The Shadowers by Australian artist Monika Tichacek invites the viewer on an uncanny journey in a dark woodland, a type of hellish paradise found nowhere. It portrays a harsh, surreal chain of interactions among three female figures, unfolding a fictive scenario of torture rituals and power games between dominator and dominated, torturer and tortured. Tichacek herself plays one of the characters, a passive victim awaiting her brutal matron who drags her into the depth of the wood, where she carries out her evil scheme. A third figure later joins in, linking with the victim and the trio’s cycle of sadomasochistic games.

The film oscillates between violence and morbid eroticism, between disgust and repulsion on the one hand, elegance and beauty on the other, pushing the viewer to the limit of endurance, eliciting feelings of discomfort and uncertainty. The film is perceived as a psychological nightmare concealing the fears, secrets and passions of each and every one of us. The characters carry trauma; they may even be regarded as trauma incarnate and as the subconscious reflection of all the phobias, pain, perversions, and evil inclinations. They operate within a sinister, merciless dominator-dominated array, presenting its weak victim versus the blood-thirsty victimizer.

One of the pivotal elements in the film is the theme of transitions and metamorphosis. The body transforms into a battlefield, undergoing a series of physical and mental changes. The power relations among the figures and their dynamics evolve and change. The video is interwoven with transitions between interior and exterior, day and night, as well as shifts in the soundtrack from the sounds of a pastoral forest to cries of despair; fluctuations between violence and beauty when a wound turns out to be a flittering precious stone, between man and beast, and between life and death. The cords linking the figures likewise become a channel of communication through which organic materials such as saliva and blood pass. The figures operate according to the codes and norms of an invented, imaginary language describing pain, trauma, and passion. As in a horror movie, the viewer experiences moments of fear and jolting, he is captured in the illusion, moving between dream and reality. In some respect, the work is a radical, perverse continuation of fairytales a la the Brothers Grimm, which are characterized by motifs of woodland, imagination and horror.

The artificial, mannerist effects in the film, the kitsch and the sickly imagination reveal a variety of influences. In 2001 Tichacek was an intern in Mathew Barney’s New York studio when the latter shot the last film in his Cremaster series. “What drew me to Barney’s work was the prosthetic materials and forms he uses to create these gender-ambiguous creatures,” says Tichacek. It was these strange, elf-like bodies that I loved.” During her stay in New York Tichacek met American transsexual idol, Amanda Lepore, with whom she filmed Lineage of the Divine(2002), a precursor of the current work. Tichacek was enchanted by the star’s exaggerated, operated, unnatural beauty: as someone who has “a love-hate relation to femininity, I’m drawn to someone like her, but she is also a tormenting thing, a sign of what’s oppressive about femininity. Like in my own upbringing in Switzerland before moving to Australia in my late teens. It was very conservative there. Very beautiful and gorgeous, but strict and oppressive.”

Monika Tichacek (1975) was born in Zurich. She moved to Australia in 1994. Lives and works in Sydney.