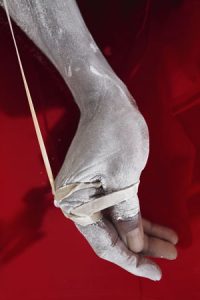 Born to a French mother and a Gabonese father, Myriam has always felt herself the offspring of a “domino couple” (black and white), which was considered a “historic monstrosity” since neither of the two cultural groups accepted the birth of this third entity, the métisse. This feeling led her to leave her native country at a young age. Trained as an artist in Bordeaux in the late 1980s, Mihindou discovered her affinity with Western art movements such as feminist art, Land Art and Arte Povera, melding together diverse elements into her pictorial language. She left her studio in favor of outdoor performances of dances, mostly in natural surroundings, which she captured in photographs or films. In recent years she exhibited throughout the world. Feeling at home in two cultures, she works in a universal pictorial language, combining the contemporary and the traditional. Her works have a sculptural sensibility, even her numerous photographs and videos, in which she perceives herself as a reproduction of an organic sculpture. Her self-reflexive photographs deal with the female body and its representation