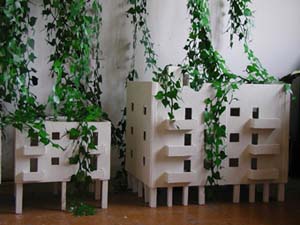 Weissman’s neighborhood in the installation Black Lawn suffers from overgrowth: residential buildings, black lawns and creeper plants, parasitic beehives, yellowish pools and a reservoir of pond-scummed water, and in the midst of all these – three of his typical figures with blown-up heads.

Weissman’s buildings exceed model dimensions, filling the space. The stucco mixture sprayed on the external walls and the synthetic whitewash coating the interior recall 1970s aesthetics. The residential neighborhood is modeled as a cross between Tel Aviv buildings and Neve Shaanan, Haifa apartment blocks, where Weissman grew up.

Black turf sprouts from the floor, wild and uncut, around puddles of urine or resin. Leaves climb down and creep along the walls. Large parasitic beehives cling to the houses, attempting to take over the neighborhood. In the desolation generated by the fierce growth, Weissman’s pupas or sperms await their turn to hatch, defenseless. Their bodies are covered in felt, and their heads are enlarged in comparison to their bodies. Two of them lie between the structures, whereas a third appears as though it had fallen on a carpet of black lawn. A projection of a moving painting on the wall features figures swept in a current, like scenes from upriver, where the surge had already struck, and will soon arrive here, to the neighborhood deserted in fear of the imminent flood.

Weissman’s work is characterized by industriousness. It takes him over like the creepers that strangle the space. The work is a parasite that won’t let go. Weissman’s installation appears ‘drawn’ – painting compositions and color strategies assume three-dimensional forms.