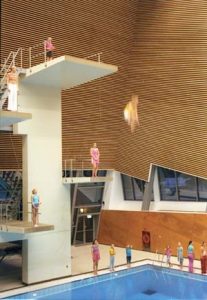 “[Cinema is] the only experience in which time is given to me as a perception.”
— Jean-Louis Schefer

Making art, according to Bolivian artist Narda Alvarado, allows one to alter reality according to one’s wishes, with no restrictions. This permits her “to live in a chaotic, contradictory, absurd and romantic world.” In her oeuvre, she juxtaposes order and chaos at several levels and adds humor to complete the picture.

In Killing Time, Alvarado uses the immaculate sport of diving to create a messy scene that depicts an off-beat measuring tool. The divers wear clothes that function as water-carriers. They are weighed before and after they dive, so that the amount of water drawn from the pool can be calculated. Alvarado suggests that it may be just the preliminary before she sets out to calculate the number of water drops in the divers’ clothes, as well as their path and speed. At the very end the divers undress and are exposed in their “normal” performance outfits. The story begins in an orderly fashion, but disorder soon conquers the stage. The entire scene is practically a device for killing time until real diving practice starts as the video ends.

The idea for the work came to the artist as she was “killing time” before an appointment. Somehow her mind wandered to high-school mathematical problems concerned with relations between mass and time. She remembered these equations as hard to solve. Their beauty, she found herself thinking, is how detailed and infinite they can be.Narda Alvardo

In Olive Green, Alvarado asked the Bolivian Traffic Police to block a main road in the hectic city of La Paz just so they could each eat one olive from a plate. Thus situated in rush-hour traffic, the police intervention in the erratic driving patterns of a busy morning creates a peaceful and delicate straight line, an intermission of strange, out-of-place order.

The unusual ceremony, wherein members of a force dedicated to maintaining order arbitrarily stop traffic in the city, gave both policemen and spectators a rare opportunity to contemplate time and pace in our daily lives.

Some background: ‘olive green’ is not merely the color of the police uniforms, but also the nickname of the force. Furthermore, demonstrations using human barriers and blockades are daily occurrences in Bolivia. In 2003, when this work was made, the police protested as well, but their protest took the form of a strike, which – through absence – increased the reign of chaos in the city. Alvarado skillfully knit all these elements into a four-minute video performance that juxtaposes intensity and serenity, and weaves the specific national context into a wider, universally accessible visual narrative.

For Alvarado, each piece emerges from a single interior tableau. The viewers of Olive Green and Killing Time walk away with a distilled image that directly echoes the artist’s own, an image which stays with them long after they leave the exhibition hall.

Narda Alvarado (1975) came to Israel for a residency at the Jerusalem Center for the Visual Arts (JCVA) in December 2006; she is currently working on a piece conceived during the residency and related to her experiences here. Works and lives in La Paz, Bolivia.