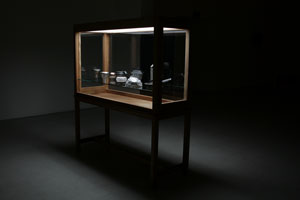 An assortment of solar lamps is showcased in a glass cabinet the style of up-scale boutiques. A bright fluorescent light, fixed at the upper end of the case, remains permanently on (even outside the show’s opening hours) to ceaselessly charge the solar lamps, thus preventing them from discharging the solar energy stored in them – in effect, preventing them from giving light. Artist Noa Giniger, who often investigates light in her work both as idea and as matter, presents here an ongoing scene of fatal and excruciating relationships, in which the actions of one side prevent the other from realizing its embedded potential, from unloading and reaching self-consummation.

Special thanks to Jony Arbid

With the support of the Mondriaan Foundation, Amsterdam