Train, 2003-2004, video, 13 min.
This video piece depicts a ride on top of a model train ride through various rooms in a domestic space. What appears as a homogenous space through whose walls the train (and the camera) passes turns out to be a fusion of different rooms from multiple houses via simple editing. A closer look reveals the differences. Shot in England, the work generates a journey between economic and social classes, and between different ways of life. It maps out, from a single point of view and without hierarchy, an assortment of lifestyles. 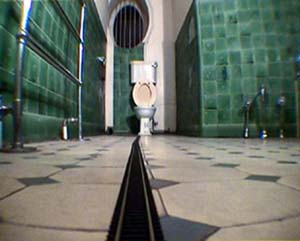 This is This, 2002, video, 14 min.
A journey ostensibly shot from a car, merging two landscape forms: one is extracted from a drive in England’s suburbs, the other – from photographs of models comprised of domestic objects (such as jugs or potatos) coated with gray styrene (a material used by architects) and placed on an MDF surface masquerading as the ground. The work connects the various spaces via crossfade editing that creates identity between elements in the model and elements in the real landscape that share a similar form. The model is perceived as an abstraction of the landscape, that “seems to drain the real world of color and texture, leaving it less recognizable,” says the artist. Tying reality to its imitations, this move elicits the question: from what signs do we perceive reality about which we can generate knowledge?