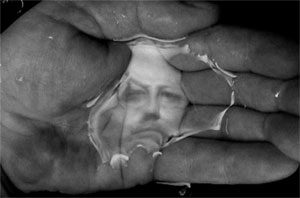 Spanning over three decades, Colombian artist Oscar Muñoz has developed an important body of work regarding the status of the image in relation to memory. Regarded as one of the most significant contemporary visual artists in his native country, his work has also captivated audiences in the international scene. Muñoz’s oeuvre defies media characterization, moving freely between and among photography, printmaking, drawing, installation, video and sculpture, effectively blurring the boundaries between these practices through his use of innovative processes.

Oscar Muñoz began his studies in the seventies in Cali, a city where there was an intense and multidisciplinary cultural movement that included writers photographers, film makers and visual artists. Many of them, such as Carlos Mayolo, Luis Ospina, Fernell Franco or Andrés Caicedo, are considered to be pioneers in their respective fields. This was the context and those were Muñoz’s peers in his formative years. At that stage of his career, Muñoz was working on large-scale graphite drawings in which he made visible the sordid atmosphere of tenement houses and its dwellers, through works of deep psychological overtones. Muñoz’ work had since then some characteristics that have remained constant in his later work: his involvement in social issues; his technical mastery for handling materials; the use of photography as a tool for fixing memory; and an ongoing investigation on the dramatic possibilities of light and shadow in the rendering of an image. In Muñoz’s work the phenomenological approach of Minimalism -with its emphasis on the relationship between the work, the audience and the space that contains both- converges with the “inquisitive” character of engaged art.
In the mid-eighties Muñoz distanced himself from traditional methods (like drawing with charcoal on paper) and started to try new processes and supports. However, it is in the nineties when his work starts to question drawing, printmaking and photography through a radically innovative approach. He also addresses for the first time the relationship between the piece and the space where it is installed, and the role of the observer as well as that of the passing of time in the process of constructing an image.
The artist’s decision to abandon traditional formats and techniques while still taking their primary sources and mechanisms to investigate the ephemeral has resulted in a work that is as much grounded in the intrinsic qualities of the materials employed as in the poetic associations they embody. The transcendent use of fundamental elements (water, air and fire) in various processes testifies to the inner tensions found in the circumstantial manifestations and cycles of human life.
Monuments and memorials, whose task is to fix memory and thus become instruments to commemorate a given event in the future, end up by being dependent of the historical context -and usually they gradually loose their ability to embody what they commemorate- ending up being little more than mute buildings, unable to communicate anything beyond their own materiality. The unstable image in Muñoz’ works, always oscillating between presence and absence, is paradoxically more efficient as a memorial or a monument since it addresses poetically the ephemeral nature of human existence, memory and history. His work transcends the specific anecdote as well as the particular and defined historical fact to allude to the human condition and the ephemerality and fugacity of life itself, to an immemorial memory that harks back to the origins of time.
José Roca, curator

“For dust thou art, and unto dust shalt thou return”
(Genesis 3:19)
In the current exhibition, Colombian artist Oscar Muñoz explores the preservation of memory. Hosted by the Herzliya Museum of Contemporary Art, which shares its roof with “Yad Labanim,” a memorial site honoring and preserving the memory of the fallen soldiers of the city of Herzliya, Muñoz presents several works which address the universal concern of keeping alive the memory of those who are no longer living. Furthermore, in his oeuvre, he examines the processes that keep our memories functioning, and how they withstand the passage of time. He challenges the boundaries of memory, using as subjects both his self-portrait and images of the deceased.
Muñoz’s works are an antithesis to the traditional memorials and monuments established to preserve the memory of people or events. Most memorials are built from static materials, such as stone, metal or concrete. Apart from certain remembrance days during which conventional memorial sites acquire special importance to the general public, these static monuments often integrate into the specific surroundings in which they are placed, sometimes at the cost of losing their relevance, since their presence and original intent elude passersby on an everyday basis.
By contrast, Muñoz’s works exhibited here function altogether differently. They demand a high degree of concentration and effort from the viewer, thus eliciting his mental and emotional involvement. In Muñoz’s oeuvre, the viewer is conceived of as an active participant.
Why is Muñoz so concerned with the preservation of memory? Part of the answer may lie in the history and the socio-political predicament of Colombia, the country in which he was born, and where he still lives and works.
In 1948, during one of Colombia’s presidential campaigns, the revered liberal candidate, Jorge Eliécer Gaitán, was assassinated. From that moment on, Colombia was plunged into a succession of violent riots and a dark new era in the country’s history began. This period lasted eighteen years, and would later be termed “La Violencia” (“The Violence”). During that era, some two hundred thousand people were killed and, at its peak, the assassinations reached a rate of one thousand a month.
Since that time, there has been a major and ever-increasing improvement in the internal security of Colombia. Nevertheless, the remnants of that violence resonate to this day in the terror campaign that the armed guerilla movements have waged against the legitimately elected Colombian government and in the violent activity of criminal factions.
Muñoz’s works are characterized by a complexity in both their content and their execution. Their interpretation functions on several levels and include references not only to the specific socio-political situation of Colombia, but also to much broader and universal themes, such as the upkeep of memories through the perspective of time and history. In addition, Muñoz challenges the traditional ways in which society deals with the loss of collective memory, offering his own dynamic alternatives. The artist incorporates into his works well-known ancient myths, such as those of Narcissus and Sisyphus, thereby transporting them to a mysterious mythological era which may be termed “immemorial” (predating that which can be remembered), thus prompting the title of this exhibition.
Muñoz uses unconventional materials in order to create images over unexpected supports. In Narcissus he paints a self-portrait with charcoal dust over a support of gradually evaporating water. In Intervals (While I breathe) he burns, with a cigarette, another version of his own image over paper, in a manner reminiscent of a computer printout. In Project for a Memorial the portraits of the dead disappear almost as soon as they are created, since the brush, dipped in water, paints them over tiles that have been heated under a strong sunlight.
In all of Muñoz’s images, one may identify the elements of change, transmutation, and disappearance. The viewer must immerse himself in the process of safeguarding the memory of those images since they change incessantly. He is required, at all times, to retain whatever his eyes see at a given moment, for this will inevitably change a second later. His mind must learn to maintain the link between the image at the beginning of its transformation and what remains of it at the end of the process. The beholder of Muñoz’s oeuvre cannot be an indifferent observer. He will become actively engaged in the fate of the characters and in so doing, achieve the preservation of their memory.