Osias Hofstatter | From the museum's collection

When Osias Hofstatter arrived in Israel in 1957 and laid down his wandering stick, dams opened releasing a powerful stream of creativity which seeped into the artistic consciousness of the country. Researchers and art critics as well as museum curators define his work as being close to expressionism and the atmosphere as being directly influenced by his personal history.
“Hofstatter’s art expresses qualities of anxiety, worry, nightmare and panic. There is a tension between the anxiety aroused by the Holocaust and the anxiety due to religious existentialism”.
The stigma of a painter of the Holocaust, and his preference for using black ink as a symbolic choice channel the universal work of Hofstatter into a narrow and limited path. A closer look at the paintings which mirror the world of the artist but also express the spirit of the era, make it necessary to free oneself from existing conventions and even to understand the message behind his words: “Perhaps you’ll understand that a ‘hasid’ who looks like a ‘hasid’ is not a ‘hasid’.”
Hofstatter places the human being in the center of his universe. Over his complex morphology, which is of secondary importance to the artist, are planted, as an artistic act, innumerable essence of two major kinds: one the pure painting which serves as a means for placing the figue within the given frame (mostly paper), the other, to express the sum total of sometimes contradicting truths of which this essence is composed. 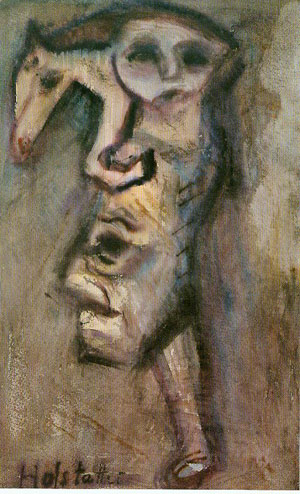 In the process of creation in which the dimension of time is of secondary importance, beginning in the Sixties, a formula begins to crystallize, by means of which Hofstatter disconnects his works form every connotation, time and place. The landscapes to “populated” urban scenes which express, perhaps, the artist’s attachment to “the place”, but quickly disappear in order to focus most of the attention on the actors of Hofstatter’s tragi-comedy in which laughter and tears blend with the joy and sadness of life. Hofstatter’s protagonists are no heroes but neither are they nonentities.
The penetration into paper, the etching, the continuous dialogue between the form and the background which characterized his works in the years of untiring search (1950-1970) gave way to a predetermined division between the background which serves as a minimalistic stage and the actors in the theater of life. In this theater, the mythology lost its glory, one does not measure royal raiments and the box of illusions is empty.Out of the estrangement blossom ties between the figures, out of generous motherhood sprout signs of disconnection but also signs of freedom, of a new beginning.The human being, whose gender to Hofstatter is of no importance is presented in the nude juxtaposed to the depth of the soul, its nonentity and its greatness.
Hofstatter represents the complete artist, a man of knowledge, a sceptic philosopher who never tires of examining the mysteries of life. A humanist and aesthete who touches the most delicate fiber of human pain. He examines suffering but does not wallow in it, and succeeds to a great extent in rising above it. Thus he managers to express universal feeling and thoughts, whose concept of time is infinite.
Yoav Dagon (Museum Director 1981-1993)