The title given by Pesach Slabosky to this work attests to his desire to unite the art he creates and the life transpiring around him, thus linking the artistic-spiritual practice and the physical-biological processes that allow their existence. The title goes back to that of an earlier show he presented at Givon Art Gallery, Tel Aviv in November 1998. The current work in fact continues his preoccupation with the same contents in sculpture. The glass underlying this work represents substance in a fluid state of aggregation that can undergo multiple metamorphoses with neither substantial nor qualitative loss of matter. For all the materials selected by Slabosky for these works, this is a ‘second chapter’: bottles, broken glass, glass leftovers from his neighbor glazier, scraps, used nails, etc. The element of recycling is not only ecological, economic or sanitary. It represents the ability to move from one phase to another, to create layers and be reincarnated in different shapes and forms, while preserving a continuum unique to the process of work with glass. This is similar to the way in which the substances that constitute our world undergo endless geological processes of wear and tear, disintegration, and metamorphic fusion, to produce new substances that retain certain data about their various origins. 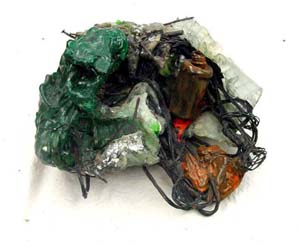 Recalling how the work process began, Slabosky says: “Having attended my son’s Lag Ba’Omer class bonfire, I saw the influence of fire on a range of materials, including glass bottles. Since then I have explored the special mode of firing treatment by experimenting with glass and other materials. I prepare the right kind of fire, add the materials and manipulate them so as to generate unique formations. I repeat the process several times, until I feel that I have arrived at a good result. Part of the process of creation continues later, when I add color or some other elements to the works, and so the sculpture undergoes several stages and processes until it reaches the end result.”

Slabosky refers to his artworks as objects with which people can live. He alludes to the traditional bourgeois knickknack: porcelain ware behind glass, a vase on the coffee table, and souvenirs on a buffet. According to Slabosky, “I look for something that in the corner of the eye looks like a porcelain figurine situated in the living room; I perceive this as a way to sneak into the homes of ordinary people… An artwork that hangs on the wall or is placed somewhere nice in the house goes through a process of affinity and befriends the house and its dwellers; unlike a bourgeois ornament, it crosses the passive barrier of a decorative golem.”
The porcelain models, the tradition of a centerpiece on the living room table, and other objects customarily found in bourgeois homes, often indicate an excessive object, consisting of decorations and patterns, which, like Slabosky’s sculptures, form a rich baroque work. Slabosky harnesses the excesses of form, the coloration, and the sculptures’ formal intricacy to effectuate a merger between an intimate and a dramatic work.