The work was shown first in the Israeli pavilion in the Venice Biennale in 1999. Curator: Meir Ahronson.
“The work of Philip Rantzer takes place in a defined space. In a spacious shack, made of simple wood. Old dolls, stuffed animals, lie on a large table covered with ratty carpets that stands in the center of the shack. The whole comprises remnants of a past that inhabits undefined, continuous time, progressing toward an equally undefined future. The viewer entering Rantzer’s exhibition space symbolizes the present; he is present time (according to Walter Benjamin’s perception of time). The viewer activates the installation. Unbeknownst to him, Rantzer gives him the power to activate the things on and around the table, to begin the Shaman-like ceremony of reviving the dolls, which i have described elsewhere.This act is concealed from the viewer. As far as he can tell, it is automated and mechanized. He does not press the button that begins the ceremony. Rather, it is his movement in the space that triggers the doll’s breathing mechanism, though all he see is chaotic movement whose cause is obscure. suddenly, something happens. He does not know why or what instigated it. The chaos is a result of there being several points of activation, which are not triggered in any set order, nor according to the path off the viewer’s movement. 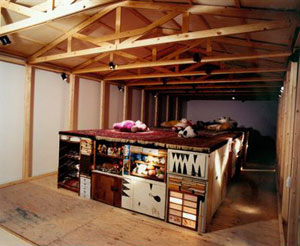 When several viewer are inside the closed space of work at once, they trigger the dolls for each other, though the “actual instigator” remains anonymous. Involuntarily, this generates “mutual dependency” among the viewers, who become, as one, “the ultimate viewer”. From a distant hideaway, Rantzer keeps for himself the role of the Creator who creates an order whose purpose and causes are hidden. The many points of activation prevent the viewer from deciphering the order of movement, or from stopping it.”
From the israeli pavilion’s catalogue, Venice Biennale 1999 – “Memory as History – History as Memory”
Meir Ahronson (Head curator, Ramat Gan Museum)