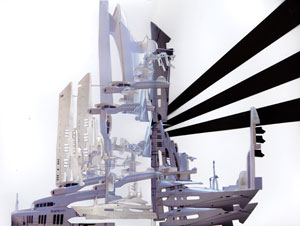 Another Proof of the Preceding Theory, Video, VHS transferred to DVD, 15 min, 2008

The film explores the relationship between science, work and ritual, imagining archaeology as a future cult. As two robed disciples stray off from the dig, they are drawn to the drone of the stones and proceed to play the henge like a gigantic Theremin. Just as a Theremin is played with the hand interfering in an electromagnetic field and producing sound without contact, so the stones respond to the choreographed bodily proximity. Finally, one of the two continues alone to the avenue at Avebury, where the magnetic pull of the stones reaches its climax.

Shot on VHS, the film features a score by Zuzushi Monkey, with percussion and Theremin sounds mirroring the action. The performers are mostly artists and archeologists from the art and archaeology teams.

A display of costumes, props and images taken form Performative Construction of a Future monument for the Dialectic Negation of a Post-Catastrophic Society, a new experimental theatre piece by the industrious Pil and Galia Kollectiv, performed on the biennial opening night at the City Gate Plaza. The setting was left at the original site of the performance, as a fresh archeological remnant to a performance now concluded.

On biennial opening night, the Kollectiv presented a performance at the Herzliya City Gate plaza (Sha’ar Ha’ir), in front of the unfinished city hall building, during which a monument to future crimes of global capitalism as erected. The monument was inspired by yacht design – a last remaining token of tangible wealth in times of financial and geographical unrest 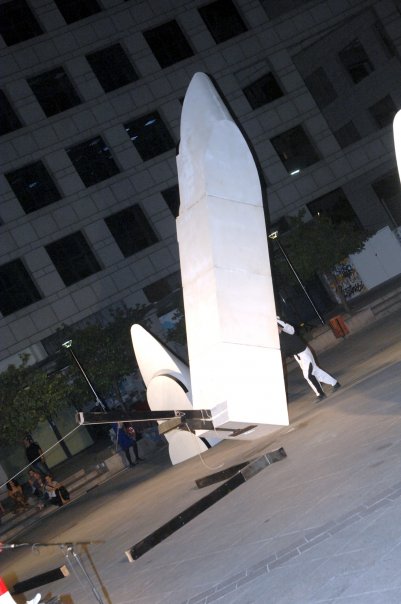